Big Brain Theory Program launched in 2015. This call puts a high priority on individual creativity, allowing scientists to launch risky, “thinking out the box” projects, and on cross-disciplinary teamwork projects proposed by researchers, clinicians, engineers, and platforms, selected by the SAB. These competitive projects have successfully generated fruitful collaborations across the Institute. To maintain the momentum for promising new projects, BBT calls will be launched every 2 years for 7-8 projects selected by the Scientific Advisory Board for funding of up to 200 k€.

To date, 15 projects have been funded in the 1st call (list below), and 8 projects in the 2nd call (table below). 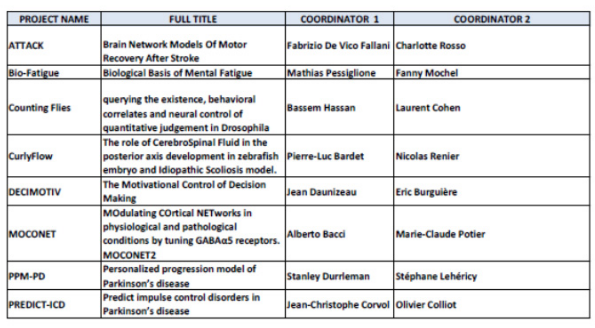 The project aims to study cortical networks modulation by focusing on specific inhibitory synapses containing GABA α5 receptors. We will use electrophysiological, pharmacogenomic and behavioral approaches on trisomy 21 mice models.

DIEP
Study the impact of D2HG on the epigenetic modulation of microglia in gliomas.
Marc Sanson

This project focuses on the D2HG, a diffusible molecule produced by gliomas harboring a mutation in IDH1/2 gene. D2HG is able to reprogram cells and could thereby alter the properties of immune cells that infiltrate the tumor and promote tumor growth.

This project’s goal is the construction of a digital model of Alzheimer’s disease evolution, which will simultaneously show the progression of different types of lesions in patients’ brain, the evolution of biological markers characterizing patients‘ condition and the successive apparition of symptoms. This model generated from numerous patients’ clinical and imaging data will eventually enable to predict the disease evolution in patients or subjects at risk.

The project aims at establishing an innovative assessment tool for multiple sclerosis progression, by considering all clinical and biological parameters as non-independent. Using an integrative model, the project’s purpose is to identify combinations of immunological, genomic, neurodegenerative and remyelination markers, which are specific, reliable, and predictive of the irreversible disability developing along the disease.

Lucid dreamers can direct their dreams and provide information about their ongoing dream by using an ocular code. They will help understand how the brain automates a gestural sequence during sleep, by redoing the sequence during REM sleep in a functional MRI.

Contrary to what happens for sighted people, the congenital blinds’ visual cortex is activated during non-visual tasks, such as those involving language or memory. The nature of the information carried out by these activations is, however, unknown. The project aims at decoding the information represented in the congenital blinds’ visual cortex, using magnetoencephalography and functional MRI.

We are proposing the use of a unique cohort of 300 patients with consanguinity and apply an approach for mapping homozygosity areas combined with exomes sequencing, in order to identify new genes involved in recessive and early forms of Parkinson’s disease. The objective is to improve molecular diagnosis and genetic counselling for patients and their families, to better understand the involved pathophysiological mechanisms and to develop new therapeutic approaches to slow the progression of the disease.

Glioblastomas are the most aggressive primary brain tumors in adult. We propose that the oligodendrocyte precursor cells (OPCs), responsible for the central nervous system myelin formation, play an essential role in the glioblastomas. We will determine whether OPCs are required for tumor growth, and if drugs promoting oligodendrocyte differentiation (pro-myelinating drugs) can be used to force tumor cells to differentiate, and thus become less aggressive. The objective is to develop a new therapeutic strategy for the treatment of glioblastomas.

What makes us weight the pros and cons when we take decisions? This project aims to develop and validate a neurocognitive quantitative model of cognitive resources motivational control. In the longer term, this work could be used as a reference to study decision-making’s abnormal control, as it is expressed in neurological pathologies and/or psychiatric disorders associated with impulsive behaviours (Parkinson’s disease, frontal dementias, attention deficit disorders with or without hyperactivity, obsessive-compulsive disorders, and so on…).

LIBERATE
Understanding the evolution of communication between different areas of the cerebral cortex during normal and pathological aging.
Bruno Dubois, Nathalie George

This project aims to study brain connectivity phenomena during an episodic memory task in the long term both in young, elderly, and at risk of developing Alzheimer’s disease subjects and in patients at prodromal stage. The goal is to understand the role of normal aging, cognitive reserve and alteration of brain networks in early Alzheimer’s disease on dialogue and communication between different areas of the cerebral cortex.

MAXIMS
Validating the specificity of MRI biomarkers to detect lesions of the brain.
Alexandra Petiet

The project aims at validating the specificity of new MRI biomarkers of white matter microstructure in experimental models of myelinopathy and axonopathy by quantitative histological methods. These same biomarkers could be used in humans in order to improve detection and follow-up of axonal, myelinated and inflammatory brain injuries during the early phase of Alzheimer’s disease.

The project aims to elucidate the role of electrical activity in myelin plasticity and remyelination in the central nervous system. It is focused on synapses functions between axons and oligodendrocyte precursors, as well as nodes of Ranvier. Combining multidisciplinary approaches (optogenetics, calcium imaging and bi-photon) in zebrafish and mouse, our aim is to demonstrate that these axo-glial interactions have a major role to play in neuronal circuits modulation, and remyelination in neurodegenerative and neuropsychiatric pathologies (multiple sclerosis, obsessive compulsive disorders).

The project is a study that aims to understand the mechanisms leading to cellular damage in cerebral ischemia. To this purpose, we will use an Imaging special sequence by Magnetic Resonance: spectroscopic imaging diffusion. It will define the processes taking place in different compartments (neurons, oligodendrocytes, glia…) to be able to develop specific neuroprotective medicine over the longer term.