The Clinical investigation center (CIC) is an outstanding gateway between research and care, which saves valuable time to cope with the disease and provide more quickly innovative treatments to millions of patients suffering from the brain and spinal cord diseases.

Unlike usual laboratories, researches within the CIC are performed on healthy and sick men with a double objective : understand the disease mechanisms and evaluate the effectiveness of new drugs in the early stage of their development. Such researches can only be performed with the patients and healthy volunteers’ assistance, who agree to participate in the various protocols. The CIC thus initiated several scientific advances to improve the understanding and therapeutic management of various disorders of the nervous system (Parkinson’s disease, multiple sclerosis, cerebellar ataxias, Alzheimer’s disease,…).

You will find in this folder : the missions, the legal framework and the CIC’s organization ; the ongoing researches and the way to participate as a patient or healthy volunteer ; major scientific work result published over the past few years.

A FEW FIGURES ABOUT THE CIC : 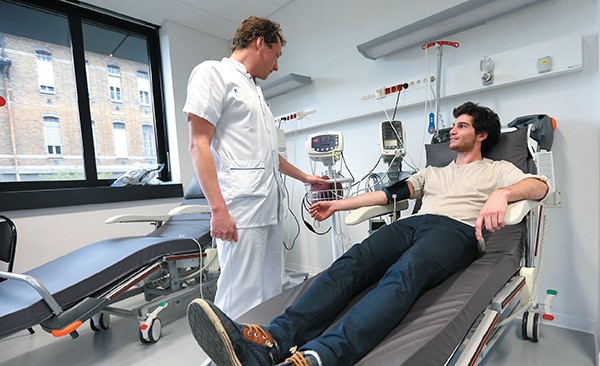 Parkinson’s disease : deep brain stimulation of the subthalamic nucleus is a treatment having a positive effect on Parkinson’s disease motor symptoms. However, this treatment does not improve balance disorders and falls. A therapeutic study conducted at the CIC by a team of the Institut du Cerveau – ICM (Carine Karachi and David Grabli) shows that the stimulation of another deep brain target, the pedunculopontin nucleus (NPP), could improve walking and balance disorders, which are resistant to drug treatment in some patients. The study, carried out as double-blinded on six patients, highlights a decrease of the “freezing ” and falls for three of them, as well as an improvement of their postural control and their quality of life. These very encouraging results open the way for the development of new therapies for severe forms of Parkinson’s disease. They must however be tempered, considering the surgical complications, highlighted in this trial. As a result of this study, funding was secured from the Michael J. Fox foundation for setting up a larger therapeutic trial targeting the NPP. CIC also participates in evaluating new drug therapies for Parkinson’s disease.  Studies on medications against the motor complications of the disease (motor fluctuations, dyskinesia) were completed or are still ongoing (Jean Christophe Corvol).  Furthermore, current treatments are not effective on the “non motor” symptoms of the disease such as cognitive impairment, sleep disturbance, behavioural disorders , autonomic receptor injuries, and so on.  Studies are being undertaken at the CIC for a better understanding of these symptoms.  For example, a very fine imaging study of the brainstem has revealed the structures implied in sleep and balance disorders found in some patients (Marie Vidailhet and Isabelle Arnulf). A therapeutic trial is also ongoing to try to improve excessive drooling (Marie Vidailhet). Finally, great efforts were made to move towards an individualization of the treatment, due to advances in genetics: a cohort of more than 400 patients is currently followed up at the CIC to identify predictive factors and there is an ongoing study in 400 patients, half of them suffering from behaviour disorders caused by the treatment of Parkinson’s disease ( dopamine agonists). The major challenge over the next years is to be able to stop the progression of the disease, or even prevent the symptoms from showing up in at risk subjects.  The current stage is still biomarker research to monitor the progress of the disease or markers prior to the onset of symptoms. A study on a cohort of roughly 300 patients has just begun at the CIC to face this challenge ( Jean Christophe Corvol and Marie Vidailhet).  This effort is run in conjunction with European partners ( Sweden, Germany, Spain, AETIONOMY project) as well as American ones (Michael J. Fox Foundation).  A therapeutic trial testing the efficiency of bee venom as a neuro protective treatment has been completed and the results are currently under analysis (Andreas Hartmann).  Besides, several new drugs having neuroprotective capacities were tested ex vivo on Parkinson’s disease patients’ blood samples, or at risk of developing the disease, in partnership with pharmaceutical manufacturers.

Neurogenetics: The Institut du Cerveau – ICM (Alexis Brice and Suzanne Lesage) grouped together within an international consortium sharing the common ambition of defining the genetic profile of Parkinson’s disease.  This project has enabled to have access to sequencing the full set of genes (whole exome) in thousands of PD patients and recently to identify six new genetic risk factors for Parkinson’s disease.  As a matter of fact, the studies highlight 24 genetic risk factors involved in the disease, 6 of which had yet never been outlined.  This significant step forward in the history of Parkinson’s neurodegenerative pathology is the result of the meta analysis of all existing “genome wide association studies”, based on data from more than 100 000 individuals.  Furthermore, studying these data in families of patients followed up at the Pitié Salpêtrière by the neurogenetics team will result in the identification of new genes responsible for the disease, paving the way for further therapeutic prospects.

Alzheimer’s disease: The first therapeutic trial to prevent Alzheimer’s disease onset is ongoing (Bruno Dubois, Isabelle Le Ber).  It is an industrial and academic international partnership with the objective of testing the efficiency of a neuroprotective drug in rare genetic forms of Alzheimer’s disease.  The originality of this study is also to offer the treatment to subjects without symptoms but at risk of developing the disease, being healthy carriers of a mutation responsible for the disease. It is the first neuro-preventive therapeutic trial ever used in human. Furthermore, other drugs are tested in therapeutic trials conducted at the CIC or at the Memory and Parkinson’s disease Institute (IM2A) coordinated by Bruno Dubois.

Multiple sclerosis: Three new treatments, tested in recent years at the CIC are now available on the market, among which a treatment to improve walking ability disorders (fampridine) and two new treatments for the inflammatory forms of the disease (Catherine Lubetzki, Isabelle Papeix, Maya Tchikiladze). Researches concerning the progressive forms of the disease are still ongoing.  The CIC teams hope they will find differential biomarkers of inflammation, destruction of myelin, and neurodegeneration (Bruno Stankoff).  Studies to test drugs against progression (2 studies) and to foster myelin regrowth (1 study) are ongoing. A preclinical study was carried out on 70 patients living with different types of multiple sclerosis to test the efficiency of a new treatment. Finally, the CIC was involved in two therapeutic trials intending to develop a new symptomatic treatment for multiple sclerosis, developed by MedDay, a company incubated at the Institut du Cerveau – ICM.  In this context, the efficiency of MD1003, a new drug against the progressive form of SEP, has just been confirmed by a phase III study carried out on 154 patients. This treatment not only delays disease progression, but also improves some patients’ health outcomes.

Amyotrophic lateral sclerosis: The unhappily negative results of a therapeutic trial in which the CIC took part were announced in 2014.  However the struggle goes on with several therapeutic trials currently ongoing at the CIC (François Salachas, Pierre-François Pradat). The CIC also takes part in a better understanding of the mechanisms involved in this disease in combining specific clinical testing, electrophysiologic examinations, spinal cord imaging, and blood biomarkers, or from biopsies (Pierre-François Pradat, François Salachas, Lucette Lacomblez, Gaelle Bruneteau, Thomas Lenglet). Moreover, the CIC takes part in the development of an eye writing instrument for patients suffering from serious motor disorders (together with Jean Lorenceau).

Rare Diseases: Beyond Parkinson’s disease, the CIC also takes part in a better comprehension and development of new treatments for rare related disorders.  The CIC took part in one of the very first international therapeutic trials on progressive supranuclear palsy (Jean Christophe Corvol).  This sadly unsuccessful trial however revealed information about the progression of the disease which will allow more easily other clinical trials.  In honor of the 50th anniversary of this disease’s discovery, the CIC has planned a meeting together with the patients’ association PSP France in June 2014, involving clinicians, researchers and manufacturers to consider how best to identify new drugs for this disease. The gene responsible for a very rare form of two hand motor coordination disorder was identified thanks to a partnership between researchers and neurologists from the Institut du Cerveau – ICM (Christel Depienne and Emmanuel Roze). The pathophysiology of this disease was then studied in experimental models and the results for humans were confirmed. A therapeutic trial was carried out in the CIC to test the efficiency of an anti-epileptic drug in the treatment of dystonias with myoclonus (Emmanuel Roze). The results are currently under analysis. Other physiopathological studies or therapeutic trials are carried out for several rare diseases : cerebellar ataxias, channelopathies, metabolic diseases (Alexandra Durr, Fanny Mochel, Bertrand Fontaine, Savine Vicart).

Participatory medicine: The CIC opens up to patient assessment at home to study the disease evolution in an ecological environment via smart applications.  Assessment and rehabilitation tools are set up via intelligent games, in particular for walking disorders in PD patients. Different tools to track patients are also set up, notably for epilepsy. Together with Alexis Genin, the IHU-A-Institut du Cerveau – ICM and Pitié Salpêtrière Hospital, a “living lab” working group is currently being established, in which patients, developers and healthcare professionals will meet to generate and implement ideas in order to better meet patients’ needs. 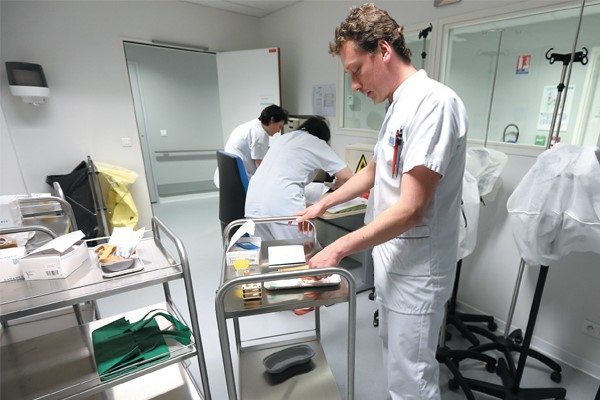 Therapeutic trials have also been conducted and are ongoing in order to advance in the understanding of epilepsy, which affects 50 million people and a particular effort is made on rare diseases : Pompe disease, Huntington’s disease, cerebellar ataxias, channelopathies…

The Clinical Investigation Centre has thus become part of a dynamic which is not only French, but also european, to conduct therapeutic trials and joint research programmes by cooperating closely with the most distinguished French and international research centres.

“The new advances made in the Clinical Investigation Centre of the Institut du Cerveau – ICM will become tomorrow’s therapies, new diagnostic methods, new means of prevention. The teams are working every day to shorten the period between the discovery of the diffusion and the treatment for all patients.” Pr. Jean-Christophe CORVOL, Institut du Cerveau – ICM-CIC Director

The CIC has recently developed a Care Assessment and Therapeutic Centre (CET). Closer to patients. This structure is dedicated to the pre-launch of new drugs, the study of patient cohorts, and evaluation of medical practices. It exists thanks to funding from the University Hospital Institute, a partner of the Institut du Cerveau – ICM. 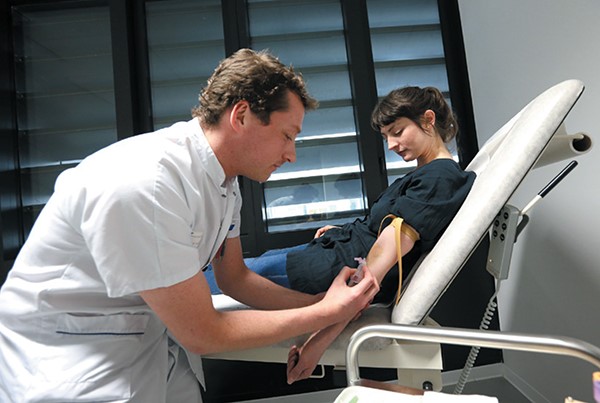 HOW TO PARTICIPATE IN THE RESEARCH ?

Anyone can participate in biomedical research, either as a healthy volunteer, or as a patient, as long as he’s affiliated with French Social Security. Special conditions apply for juveniles and people under legal guardianship. To participate, one gives his “free, informed and expressed” consent in writing after enlightened information, before the study begins. For this purpose one should be clearly and reliably informed by a written document.
One has the right to refuse to participate a research project or to withdraw at any time without consequences, notably in terms of quality of treatment.

The approach of medDay, founded by Dr. Frederic Sedel (CEO) and Guillaume Brion (COO) and incubated at the Institut du Cerveau – ICM, consists in treating neurological diseases by acting on brain metabolism. Very promising results have been obtained with the experimental drug MD1003 in patients with progressive forms of multiple sclerosis. Medday announced in 2015 that the main criterion of its pivotal clinical trial MS-SPI had been reached. MedDay is supported by the Clinical Investigation Centre and the Institut du Cerveau – ICM neuro-imaging and research Centre for 12 patients of the Pitié-Salpêtrière hospital.