On the occasion of World Parkinson’s Day, which will be held on 11 April 2022, the Paris Brain Institute takes stock of the latest advances in research and the challenges that remain in the fight against the second most common neurodegenerative disease after Alzheimer’s disease.

While treatments have made great progress in reducing patients’ motor symptoms, scientists are still working to better understand the mechanisms behind neurodegeneration, to improve the diagnosis and prognosis of patients in order to set up more relevant clinical trials, and to optimise existing therapies so that they benefit patients as long as possible. The teams at the Paris Brain Institute are carrying out numerous complementary studies on Parkinson’s disease, from the most fundamental to the most applied research. Here is a closer look at three particularly promising projects.

Parkinson’s disease is characterised by the degeneration of a population of neurons located in a deep region of the brain, called the substantia nigra. In recent years, several major players in the death of these neurons have been identified. The aggregation of the protein a-synuclein inside neuronal cells is the first of these. The exploration of familial forms of the disease has also highlighted the role of mitochondria – the cell’s powerhouses – and brain inflammation in the process of neuronal degeneration. 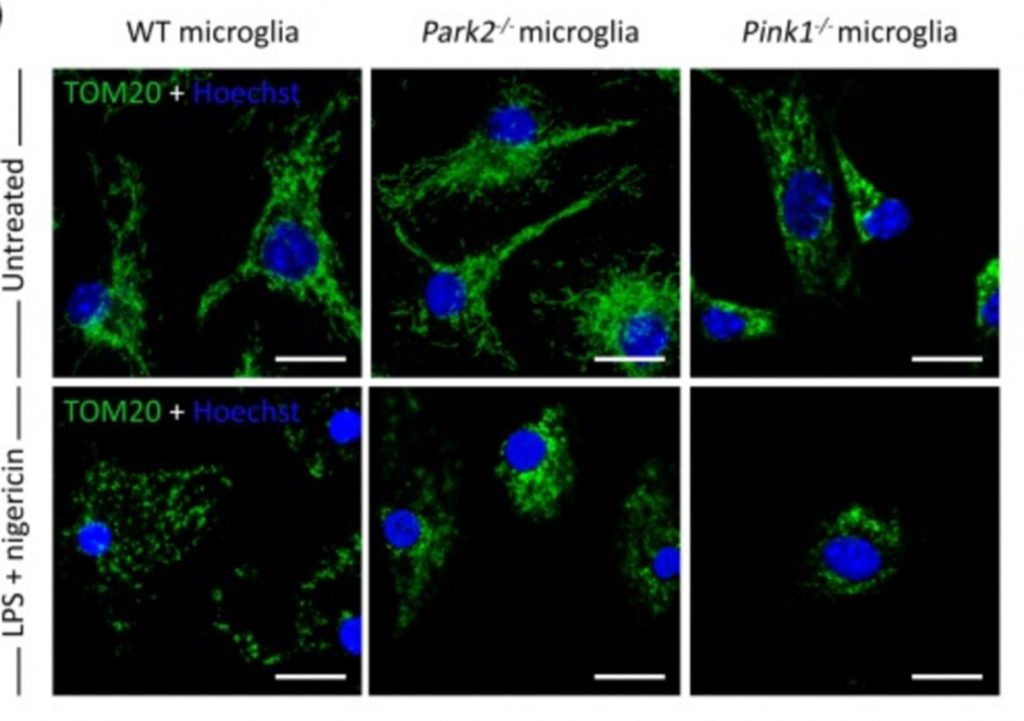 A growing body of literature links the function of genes involved in familial forms of Parkinson’s disease to the regulation of mechanisms related to immunity and inflammation. This is particularly the case for the LRRK2 and PRKN(Parkin) genes. In the central nervous system, immunosurveillance is provided by microglial cells. Although these cells are active in the brains of people with Parkinson’s disease, their precise contribution to the neurodegenerative process remains to be clarified. The team of Olga Corti (Inserm) and Jean-Christophe Corvol (Sorbonne University, AP-HP) at the Paris Brain Institute is developing an innovative project based on the use of human cerebral organoids (mini-brains) and complex co-cultures of human cells to explore the role of the microglial component in the context of mutations in the LRRK2 and PRKN genes. A better understanding of the role of microglia and immune pathways in Parkinson’s disease could open up new therapeutic avenues to prevent neuronal death and thus slow disease progression. The models developed in the context of this project could also constitute relevant tools for screening therapeutic molecules, as they incorporate cells from patients with Parkinson’s disease.

(Project led by Olga Corti and Philippe Ravassard at the Paris Brain Institute, in collaboration with Michela Deleidi at the DZNE, Tübingen).

There is not one but many Parkinson’s diseases. Each patient has different symptoms and a different course of the disease. Today, diagnosis and monitoring of the disease is based on clinical observation. The identification of biomarkers, in particular through brain imaging, is crucial for a more reliable diagnosis of the disease. Thanks to artificial intelligence, the challenge is to be able to develop predictive algorithms of the future evolution of each patient, in order to adapt their treatment and also to integrate them into clinical trials appropriate to the characteristics of their disease. 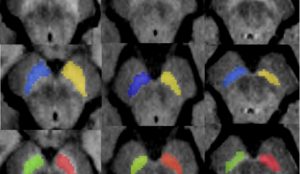 The MOV’IT team, led by Marie Vidailhet (Sorbonne University, AP-HP) and Stéphane Lehéricy (Sorbonne University, AP-HP), has used a magnetic resonance imaging biomarker, neuromelanin, which has recently led to major advances in the monitoring of Parkinson’s disease. In particular, the Paris Brain Institute team developed an artificial intelligence algorithm that automatically detects changes in the volume and signal of the region mainly affected in the disease, the substantia nigra, by monitoring neuromelanin. They found differences between patients at a prodromal stage of the disease and those in whom clinical signs have already appeared. This automatic, rapid, and assessor-independent algorithm is therefore a valuable tool for studying changes in neuromelanin in the substantia nigra, allowing direct and non-invasive assessment of neurodegenerative changes in this structure. These measurements could provide relevant biomarkers for assessing the efficacy of treatments modifying the course of Parkinson’s disease.

Until the advanced stage of Parkinson’s disease, drug treatment based on L-DOPA, a dopamine precursor, makes it possible to compensate for the lack of dopamine production by the damaged neurons, and greatly reduces motor symptoms. Over time, the effectiveness of this treatment diminishes, and abnormal movements appear. Deep brain stimulation can then take over. This neurosurgical method, which requires millimetre-level precision, involves implanting electrodes in the centre of the patient’s subthalamic nucleus, a deep brain structure. It modulates the electrical activity of this region and thus makes it possible to correct the dysfunctions induced by the dopamine deficit. The ‘Experimental Neurosurgery’ team, led by Brian Lau (CNRS) and Carine Karachi (Sorbonne University, AP-HP) at the Paris Brain Institute is seeking to gain an ever more detailed understanding of normal and pathological brain anatomy and physiology. Recently, the team was able to offer several patients the implantation of a new stimulation device, capable of recording intracerebral activity in an embedded manner. This advance opens up important perspectives, such as recording this activity at different moments of daily life, to better understand the dysfunctions of the deep brain networks in the disease and the effects of deep brain stimulation. 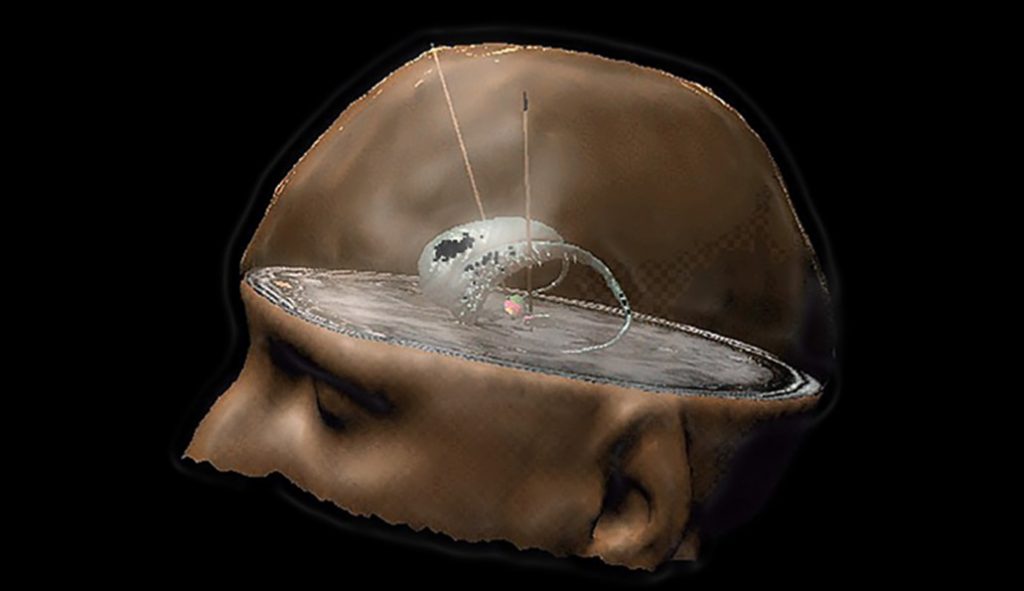 Another project, developed at the Paris Brain Institute by Nathalie George (CNRS) in this team, concerns neurofeedback methods. These approaches consist of teaching patients to regulate certain brain activities associated with the disease themselves, for example by varying a curve displayed on a screen representing their brain activity. Before these devices can be used in a clinical trial in patients, many issues remain to be clarified, including the mechanisms of learning neurofeedback, the regulation of brain activity and the role of pathological brain activity in the disease. It should be noted that neurofeedback will require very sophisticated signal analysis methods and recordings under very controlled conditions if it is to be used in a clinical context.

The tremor, the best-known symptom of Parkinson’s disease, is not the most common. The motor impairment characteristic of the disease takes various forms in patients, such as akinesia, a slowness, delay or even difficulty in initiating movement, or hypertonia, a stiffness or even permanent contraction of certain muscles. The first symptoms are the consequence of a silent phase of the disease developing over several years, during which the nerve cells of a specific region of the brain, the substantia nigra pars compacta, are gradually destroyed. These cells are so-called dopaminergic neurons: they use a neurotransmitter called dopamine to perform their function. The substantia nigra and dopamine play a key role in the control of movement, which explains the visible symptoms of Parkinson’s disease, but also in many other, less easily observable cognitive and behavioural functions, such as difficulties in concentrating, chronic loss of motivation or a depressive syndrome. The most important risk factor for developing Parkinson’s disease is age, with a prevalence of 0.04% in people between 40 and 49 years of age, which increases to 2% in people over 80 years of age. 5% of cases of Parkinson’s disease are familial, i.e. inherited through the mutation of a dominant or recessive gene. Parkinson’s disease, like many neurological diseases, is said to be multifactorial. Many environmental factors and genetic predisposition conferring a higher risk of developing the disease have been identified in recent years.