Certain activities, like walking or breathing, are singular in that they can be performed either voluntarily or automatically. For example, each of us can decide to take a deep breath and keep our lungs expanded for a few seconds before slowly exhaling. However, mostly we breathe without thinking about it; this what happens during sleep. The nerve structures responsible for automatic breathing, located in the brainstem, are relatively well-known, whereas those underlying voluntary breathing remain more elusive. A research team in the Institut du Cerveau – ICM at the Pitié-Salpetrière Hospital directed by Pr. Lionel Naccache (UPMC, Institut du Cerveau – ICM, INSERM) published, in the journal PLoS ONE, an original observation, which revealed the brain mechanisms underlying voluntary breathing and its cognitive cost.

This research began by a discussion with Prs. Thomas Similowski and Christian Straus, co-authors of the study and heads of the Departments of Pneumology and Functional Respiratory Explorations of the Pitié-Salpêtrière as well as the UMRS 1158 Inserm-UPMC (that specifically studies the neurophysiology of breathing), about a very rare genetic disorder: Ondine syndrome, or syndrome of congenital central hypoventilation. Newborn infants carrying this mutation have a severe dysfunction of the brainstem structure in charge of automatic breathing. The immediate consequence: in the most severe forms, the patients die asphyxiated as soon as they go to sleep. The treatment consists in providing these patients throughout their life with external ventilators, which they use as soon as they lie down, even for a simple nap. When awake, they breathe normally, but voluntarily.

The researchers decided to compare the brain activity of a young woman with this syndrome while awake, breathing either voluntarily or with external ventilation. Supine in an MRI apparatus, the patient was covered with sensors to measure her breathing and the concentration of oxygen in her blood, and wore a helmet of electrodes to record her electro-encephalogram. The latter to assure that she did not go to sleep while the external ventilator was turned on.

First result: when she breathed with the external ventilator, the profile of the patient’s brain activity was much closer to that of a healthy subject than when she breathed voluntarily: her “resting brain state” was normalized by mechanical ventilation. This is important because the resting network is associated with self-consciousness, introspection and imagination. In reality, when the patient breathed voluntarily, many regions of her brain were more occupied by control of the brainstem, – which in her case was not able to “pilot” her breathing by itself -, than by participating in the network controlling the resting state. Such is the cerebral cost for her of voluntary breathing.

Second result: the cerebral cost of cortically mediated breathing is associated with a mental or cognitive cost. In several cognitive tasks, the patient was more efficient when she breathed with the help of the ventilator than when she breathed voluntarily. Furthermore, this young woman told to the experimenters that when she was in secondary school, she noticed that she solved mathematics problems more easily when she used her external ventilator.

These results clarify, in an original way, the automatic (brain stem) and voluntary (cortex) mechanisms of respiration, and reveal to us the cognitive cost associated with voluntary breathing controlled by the cortex. Beyond this single case, which must be confirmed in a larger population of patients with this orphan disease, these first results suggest that an external ventilator might also be useful for these patients during cognitive activities (ex: academic learning), not just during periods of sleep. The study, published in PLoS ONE, has direct consequences for clinical practice: the “rare diseases” reference centre for Ondine syndrome, the adult branch of which is located in the Pitié-Salpêtrière Hospital, will perform cognitive evaluations with and without ventilation during routine examinations of the patients. It will thus become possible to make personalized recommendations as to the use of the ventilator during activities that make intense cognitive demands. The French Ondine Syndrome Association (AFSO, www.afsondine.org), which largely supports research in this field, is naturally very interested by this advance in care. More broadly, these results make us aware of the cognitive resources that are made available when we breathe automatically without thinking. 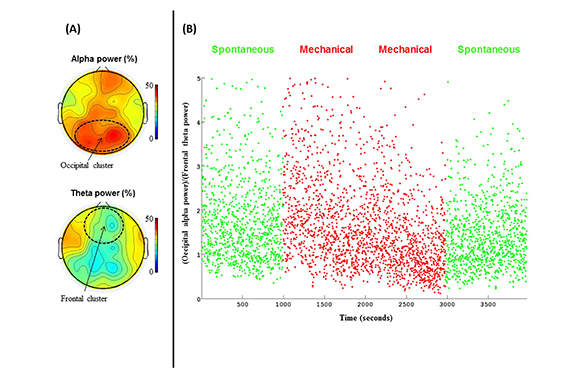 Stability of wakefulness under MV (mechanical ventilation) and SB (spontaneous breathing) indexed by EEG (ElectroEncephaloGraphy). (A). Scalp voltage topographies of alpha power (up) and theta (bottom) averaged across the 4 EEG-fMRI sessions reveal a typical pattern of wakefulness characterized by a high posterior alpha power and a low anterior mid frontal power.
(B). Dynamics of the (posterior alpha power)/(mid-frontal theta power) ration is plotted across time for the 4 EEG-fMRI sessions (ElectroEncephaloGraphy-correlated functional Magnetic Resonance Imaging). This index of wakefulness was stable across the 4 sessions, and confirmed a stable level of wakefulness all along the fMRI experiments, with no difference between SB and MV. 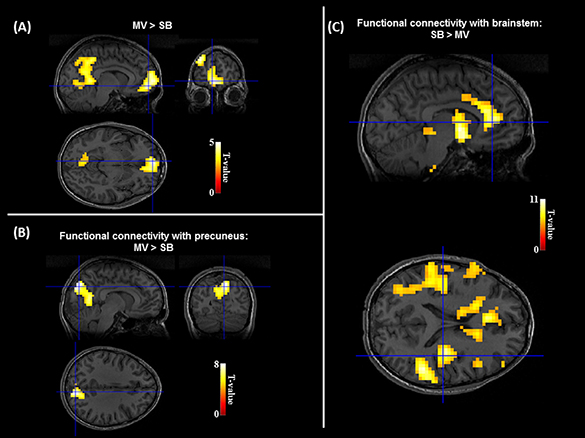 Restoration of DMN (default mode network) under mechanical ventilation. (A). Comparison of BOLD (blood-oxygen-level dependent) signal between MV (mechanical ventilation) and SB (spontaneous breathing) revealed a specific increase of activation in the default-mode network associated in awake controls in introspection and self-consciousness. No significant result was observed in the opposite contrast. See Table 1 for detailed fMRI results. (B&C). Functional connectivity assessed with a hypothesis-driven approach revealed a larger correlation with precuneus activity in posterior mesial areas during MV than during SB (B), and a larger correlation between brainstem activity and a large anterior cortico-subcortical network during SB than during MV (C). This large network resembles the executive attention network.