Today, in France, about 5000 new carriers of malignant primary brain tumours are diagnosed each year. The symptoms depend on the localization of the tumour, its size and the rate at which it develops. Gliomas represent around 50-60% of all primary malignant tumours. Meningiomas, in contrast, are frequent but benign tumours.

Brain tumours (gliomas, medulloblastomas, derived from embryonic cells, and ependymomas) are the 2nd cause of cancer in children. At present, treatments for brain tumours associate surgery, radiotherapy or chemotherapy, depending on the case, but often do not lead to a cure.

Both clinical and fundamental researchers develop the means and the tools to identify the different types of tumours and apply the most effective treatment possible for each type. At the Institut du Cerveau – ICM, two research teams work specifically on these two aspects. 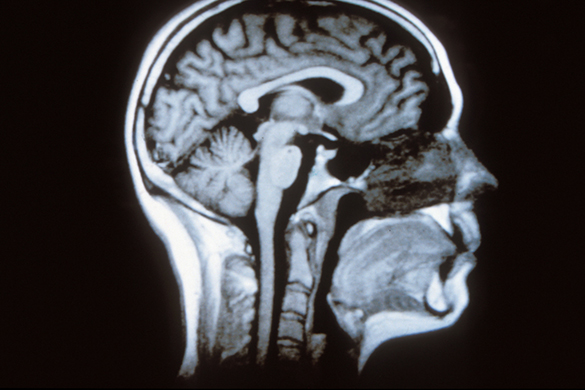 Progress in science has allowed us to increase our knowledge of the brain and better understand its functioning. We know that the brain consists of 100 billion neurons and ten times more glial cells. The role of neurons is to create and conduct the nerve impulse; the glial cells, for their part, provide multiple and important support functions (electrical insulation through formation of the myelin sheath, nutritional support, protection against aggressions). One speaks of a tumour when the abnormal proliferation of a cell leads to the formation of a cell mass.

What is a brain tumour?
Today, the reasons why a cell continues to multiply and becomes a tumour instead of disappearing in accordance with its “life cycle” are not well known. A brain tumour can develop in any region of the brain: the hemispheres, the cerebellum, the brain stem and the pituitary.

We should distinguish primary brain tumours, which develop directly in the brain, from metastatic or secondary tumours that arise from a primary tumour in the lung, colon, breast or skin. Cells from these tumours go and implant themselves in the brain.

There is a great variety of primary brain tumours. The most frequent are the gliomas and meningiomas. Malignant tumours are tumours that develop rapidly causing destruction of the brain region in which they are found, whereas benign tumours, called low-grade, evolve slowly without causing damage.

The most frequent primary tumours are the gliomas that derive from glial cells (astrocytomas and oligodendrogliomas). Low-grade tumours are not very aggressive, but in most cases they evolve towards a more malignant form called high-grade.

Tumours that develop from the meninges, meningiomas, are very frequent and most often benign. We can find lymphomas derived from the cells of the brain’s immune system, ependymomas (tumours that form in the walls of the brain ventricles). The neurinomas or schwannomas come from Schwann cells (the glial cells responsible for formation of the myelin sheath around axons). Finally, we have observe adenomas that develop in the pituitary. 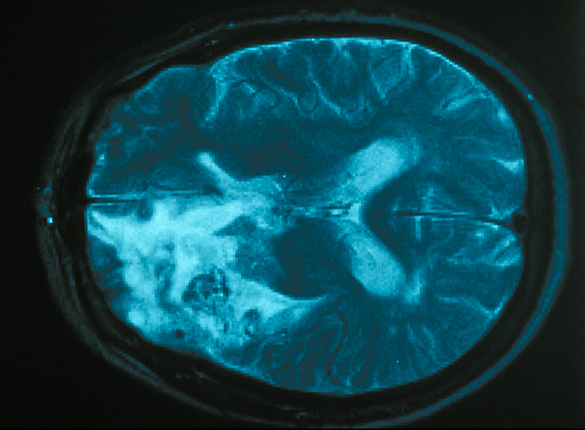 What advances have been made in research on brain tumours?
Today, two types of research that have different objectives can be distinguished, even if, in reality, they are closely related. Thanks to basic, or translational, research, we can better understand how tumours develop and identify their causes. In the past few years, high-throughput genomic research has made important advances in this field. We can now sequence all the genes and thus identify the molecular and gene alterations responsible for the formation of brain tumours. Researchers know better how to determine the properties of the cancer stem cells responsible for tumour proliferation. They have studied, in particular, cancer cells derived from glioblastomas, in order to identify the genes that are activated as well as the epigenetic mechanisms that control this activation. It has been shown that a group of genes (transcription factors), which are normally used by stem cells during brain development, are required for the activity of cancer stem cells. We have discovered that the tumours used for their growth genes involved into normal brain development.

As for clinical research, its goal is to propose new treatments for patients, either to determine the optimal dose and the tolerance by patients of a new treatment (phase I) or, at a more advanced stage, to verify its therapeutic value (phase II and phase III). In addition, for several years now, powerful sequencing techniques have allowed us to better characterize the genetic alterations in gliomas, and notably glioblastomas. For oligodendrogliomas, the past few years have witnessed the identification of recurrent mutations in these tumours, such as the mutations IDH1, CIC and FUBP1. Researchers have distinguished sub-groups with different implications for prediction and prognosis. IDH1 mutations define a sub-group of gliomas with a more favourable outcome.

At the Institut du Cerveau – ICM, two research teams are mobilized in the fight against brain tumours, in association with neurologists and neurosurgeons in the Pitié-Salpêtrière Hospital. The team directed by Prof Marc Sanson works more particularly on the molecular biology and the gene mutations that are responsible for the appearance of tumours: oligodendrogliomas, low-grade gliomas, gliomas of the brain stem and meningiomas. They try to identify clinically applicable biomarkers, of diagnostic or prognostic value, but especially alterations that can be targeted by specific treatments. In this research group, the GlioTex team, directed by Dr. Ahmed Idbaih, grows cultures of glioblastoma stem cells in order to test targeted therapies.

Dr. Emmanuelle Huillard and her team, created in 2012 and recipients of an ATIP/Avenir grant (Inserm and CNRS), try to understand the molecular and cellular mechanisms that intervene during the development of gliomas and, in particular, how the genes of normal development are “pirated” by the tumour cells. At present, the teams are collaborating on a project aimed at developing a model of oligodendroglioma by combining the gene mutations most frequently found in these tumours: IDH1 and CIC. 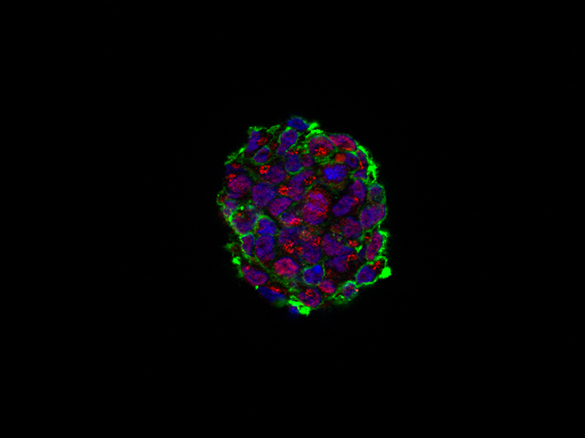 What are therapeutic prospects?
Today, it is still difficult to detect a brain tumour before it is visible by MRI (a technique of imaging by magnetic resonance). Nevertheless, the search for biomarkers, which constitutes a strategy for the diagnosis of tumours, leads to development of the means to make the diagnosis earlier. Biomarkers are molecules present in blood, urine or cerebrospinal fluid (CSF), which indicate the presence of a tumour in the brain. Identification of biomarkers allows direct diagnosis of the tumour and the choice of an effective treatment. In order to determine how a tumour will evolve and its response to treatment, we apply the methods of molecular biology and immunohistochemistry on genes which are prognostic (evolution of the tumour) or predictive (response to treatment) markers. For example, during the diagnosis of an oligodendroglioma, we look for the presence of a chromosomal alteration or the co-deletion of chromosome regions 1p and 19q. This alteration is associated with a better prognosis and a better response to treatment. Finally, the mutation in the IDH1 gene is an important factor in the prognosis of gliomas.

Currently, there are no cure for tumours. Clinical research tries, on the one hand, to improve the so-called classical treatments; for example, treat low-grade tumours by performing surgery in awake patients or better use radio- and chemotherapy to improve their efficacy and minimize their side effects, thus preserving the patients quality of life.

On the other hand, targeted therapies open new prospects. The genetic and molecular characterization of types and sub-types of tumours allows the development of truly personalized therapies. Some of these alterations, even if rare, constitute attractive targets if they are highly oncogenic; for example, the mutant form of the receptor EGFRIII and, especially, the fusion gene FGFR3-TACC3 or the mutant IDH1 enzyme, which can be neutralized with specific molecules, elicit great hopes.

What is the tumour bank?
“It’s a biological resource centre specialized in samples from patients with brain tumours, created in 1996 by Prof Delattre. It contains the largest collection of brain tumours in Europe and includes 10 000 patients.”

What does the platform do?
“We have a panel of samples of brain tumours that we try to make the most representative possible, in order to study, at the same time, what happens in the tumour, but also its environment (for example, changes in biomarkers in blood); the aim is to find biological markers that predict a response to a treatment or the evolution of the tumour. In addition, we perform research to characterize the different types and sub-types of tumours and identify the genomic alterations that are present.”

How do you interact with the research units of the Institut du Cerveau – ICM?
“Our implantation in the Pitié-Salpêtrière Hospital has a great advantage for us, because we work in association with the Departments of Neurology, Neurosurgery and, Anatomopathology. Of course, we work closely with the teams of Prof Marc Sanson and Emmanuelle Huillard; we also provide biological samples to other research teams in the Institut du Cerveau – ICM that need them for their research (Eric LeGuern and Stéphanie Baulac who work on epilepsy).”

What is the future of the tumour bank?
“We have clearly made progress since our creation in 1996. Recently, we obtained certification in France (NFS96-900) thanks to Amithys Rahimian, responsible for tumour bank quality. She helped us unify our methodology. We house the samples of two national reference centres working on anaplastic oligodendriomas and primary brain lymphomas. In the future, we hope to develop our relations with academic and industrial partners in order to increase our visibility and improve our procedures.”