Tics are the prime manifestations of Tourette’s syndrome. How do they appear ? Why do they persist ? Yulia Worbe, from Mary Vidailhet’s team, and her colleagues, have shown that patients with Tourette’s syndrome develop more normal behaviours than healthy subjects of the same age.

These results provide new insights on the mechanisms at the basis of the formation and persistence of tics, which may be, in part, learned actions becoming automatic, and persistent in the same way as bad habits. Degradations of some neural networks involved in the genesis of habits could explain the exacerbation of these behaviours in patients. These results allow the development of new therapeutic approaches to fight Tourette’s syndrome.

Tourette’s syndrome (TS) is a neurological disorder characterised by the association of motor and vocal tics. Tics are defined as voluntary movements executed in a usual manner or automatically in some situations in spite of negative consequences ; such as eye blinking, shrugs, or squeaks.

Dopamine is a neurotransmitter involved in the reward circuits promoting the formation of usual behaviours. Neural networks located between sensorimotor areas of the cerebral cortex and deep structures of the brain, basal ganglia, are involved in the genesis of habits. Defects of these same structures, and an increase in dopaminergic transmission have been previously demonstrated in TS.

Institut du Cerveau – ICM researchers have conducted a study to understand the formation of tics and usual behaviours in patients with TS. In this study, patients and healthy subjects play a computer game testing the formation of habits. In this game, images (stimuli) are shown successively to the subject, who must learn as the trials progress, on which keyboard key he should hit according to the image.
This learning process aims to form in the subject an association between an image and the related answer. This learning process is then ” devalued “: the subject is explained that some answers should no longer be given when the associated image is presented. Responses that persist despite devaluation are considered as usual responses.

The results showed that untreated patients give more usual answers than healthy subjects. Patients treated with dopamine inhibiting drugs give less usual answers than untreated patients. A brain MRI aiming to study connectivity between different brain areas, has confirmed neural networks involvement connecting the motor cortex and basal ganglia in the formation of habits in patients. 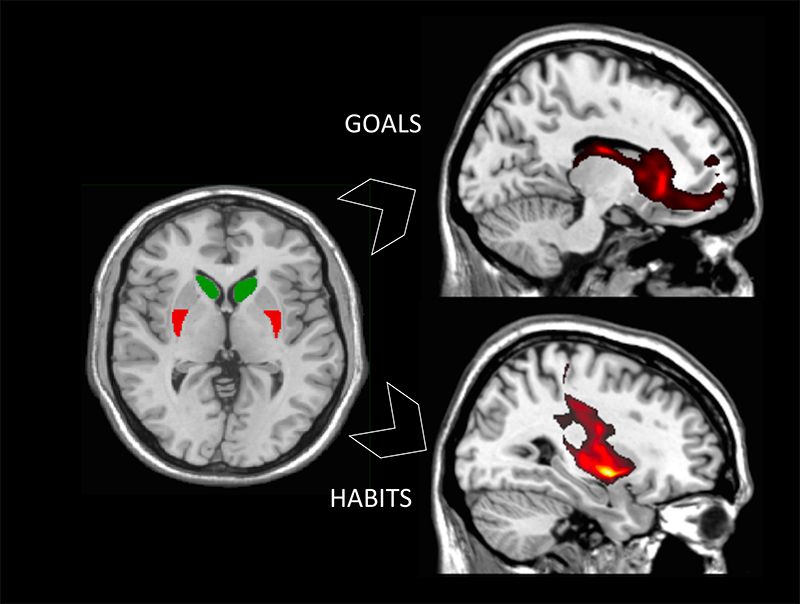 These results are useful to understand the mechanisms at the basis of the formation and persistence of tics, which could be, in part, learned behaviours that persist in the same way as bad habits do. Alterations in the neural networks connecting cortex and basal ganglia, and increased dopaminergic transmission, could explain the exacerbation of these usual behaviours in patients with Tourette’s syndrome.

REVERSE HABITS THROUGH A BEHAVIOURAL APPROACH

These results open up new insights for the treatment of Tourette’s syndrome, by both pharmacological and psychotherapeutic approaches which can be complementary. In fact, cognitive-behavioural therapies could specifically target this usual abnormal learning and enable to inhibit the motor execution of tics by teaching patients movements which compete with the latter.