The frontal lobe controls our more complex behaviours such as decision-making or creativity. In a new study published in Cerebral Cortex, Michel Thiebaut de Schotten’s team, at the Institut du Cerveau – ICM, has identified 12 areas of this part of the brain dedicated to different functions, from the simplest, such as motor skills, to more complex ones such as social behaviour.

The frontal lobe is an area of the brain responsible for voluntary motor coordination, and language. It contains, in particular, the areas that control muscle coordination, and movements of the head and neck such as chewing and swallowing. It also contains the centers of memory, decision-making, creativity, and reasoning by analogy.

Frontal lobe lesions can, for example, lead to a disruption of executive functions, which are necessary to adapt to new situations, and impaired social behaviour.

To explore frontal lobe organisation according to their architecture and their connectivity, Michel Thiebaut de Schotten and his collaborators have used diffusion MRI tractography, a method enabling to follow white fibers (axons of neurons that ensure nerve information transmission) and thus brain connectivity, and made use of Big Data by analysing several human brain imaging data banks, such as Human Connectome Project, Big Brain, and Neurosynth.

This work also confirms an anteroposterior organisation of the frontal lobe. The back of the frontal lobe is associated with areas that control simple movements such as the movement of the foot, the hand, whereas the front of the lobe corresponds to areas associated with more complex functions such as estimating the value of things, social behaviour. Thus, sophisticated planning features are found preferentially at the front of the brain. 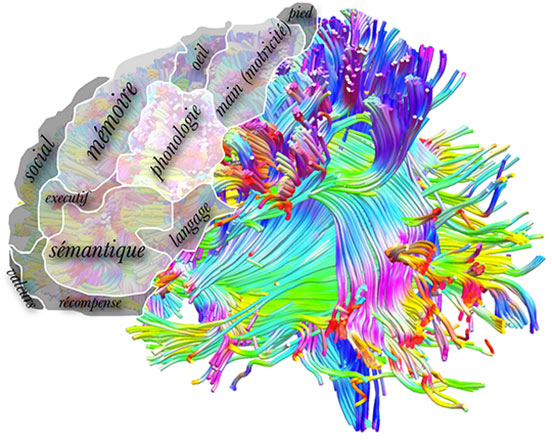 Finally, by analysing more precisely the anatomy of these areas, researchers have observed that at the frontal area of the frontal lobe, the amount of myelin, which allows rapid transmission of nerve information, decreases, which conducts to much slower information processing in this area. In return, further analyses have highlighted a greater number of connections between neurons at the front of the brain where information processing is thus integrative.

Decoding this architectural organisation can help diagnosing neurodegenerative diseases and favour nervous system development. These new behavioural anatomical markers will be applied shortly to brain pathologies associated with the frontal lobe, such as autism, attention disorders and hyperactivity of the child, in order to test their diagnostic power.

HOPE FOR PERSONALISED TREATMENT OF GLIOBLASTOMAS
BRAIN TUMOURS : ULTRASOUND CAN INCREASE THE DIFFUSION OF THE TREATMENT
INVITED RESEARCHER : WILLIAM RICHARDSON, "ROLE OF OLIGODENDROCYTES FOR LEARNING IN ADULT BRAIN"