Paris, February 13, 2020 – The team of Nicolas Renier at the Paris Brain Institute has succeeded in reconstructing the entire cerebral vascular system of mice with unprecedented precision. This work has been conducted in collaboration with Christoph Kirst, now assistant professor at UCSF, California. While many neurological and psychiatric pathologies have a vascular component, it is still under-studied due to the complexity of the blood vessels’ network, intimately intertwined with neural cells. The tool developed by the researchers opens the way to important research on the role of cerebral vascularization in the evolution of many brain diseases. The results of this study are published in the journal Cell.

To meet its important needs for oxygen and nutrients, the brain is very richly vascularized in blood veins, arteries and capillaries. The cerebral vascular system plays an essential role in the function and maintenance of neuronal circuits. Many brain pathologies, both neurodegenerative and neuropsychiatric (schizophrenia, autism or depression), have a vascular component which, although not necessarily the cause of these diseases, can be an aggravating factor. The study of the cerebral vascular system as a whole represents a major challenge, due to its density and complexity, but also an opportunity because its complete 3D reconstruction is now possible.

Mission accomplished for Nicolas Renier’s team at the Paris Brain Institute. Thanks to a combination of expertise in mathematics (Christoph Kirst and Sophie Skriabine) and neurobiology (Alba Vieites-Prado and Thomas Topilko), the researchers have succeeded in reconstructing the entire cerebral vascular system of the mouse at very high resolution with automatic recognition of the nature of each vessel (artery, capillary or vein). Since the conclusion of this study, several dozen brains have been reconstructed, as the technique makes it faster and easier to obtain this data. Whereas such reconstructions used to take several months or years of manual work per brain before, researchers can now reconstruct a brain in just 2 days.

To accomplish this, they have developed a bio-marking method to distinguish blood arteries, veins and capillaries in an optically transparent brain in order to record three-dimensional images using the latest imaging technique, light sheet microscopy. These highly complex raw data of the cerebral vasculature then passed into the hands of mathematicians who developed a software to reconstruct these images using innovative approaches combining formal mathematics and artificial neural networks. 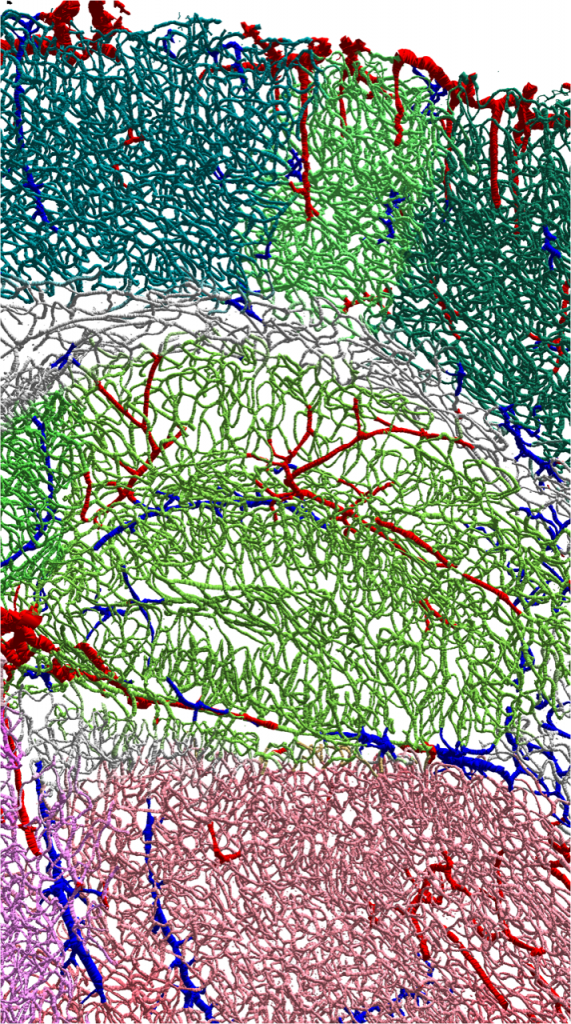 The result is a three-dimensional mathematical reconstruction of the cerebral vascular system, distinguishing the different types of blood vessels, their location and organization in the different brain regions. On the scale of a mouse brain (about 1cm3), this represents almost 280 meters and some 8 million vessels with major regional variations in terms of vessel density, very important in the sensory regions for example.

“These reconstructions open the way to new working hypotheses and opportunities, particularly to study the alteration to the vascular network in different pathologies, but also to understand the intimate organization of the cerebrovascular network and how it supports neuronal functions. “explains Nicolas Renier

To validate this methodology, the research team collaborated with Piotr Topilko’s team, which is developing experimental models of stroke, to study the impact of a stroke, which corresponds to the obstruction or rupture of a cerebral artery, on the brain’s vasculature. They observed a massive redirection of blood capillaries to the site of the stroke. “The vascular network, even in an adult brain, is extremely plastic and can be subject to very significant changes.” continues Nicolas Renier.

Having shown that the sensory regions were among the most densely vascularized in the brain, the researchers, in collaboration with Nicolas Michalski and Christine Petit of the Institut Pasteur, studied the effect of deafness on the cerebral vascular network.  They were able to measure that during congenital deafness, the vascularization of the auditory areas is largely diminished in favor of an increase in the vascularization of the cerebral areas associated with touch and sight. A form of compensation would thus exist between the different cerebral areas, the neuronal communication between these areas influencing the reorganization of the vascular network.

“These data are very encouraging and drive us to explore other pathological contexts in which neuronal activity is affected. The tool we have developed allows us to perform these reconstructions on a whole-brain scale in different contexts and thus generate new hypotheses on how various diseases modify vascular topology. “concludes Nicolas Renier.