Imagine a world where everyone has the same face. That would be a very different world than the one we know. In our world, in which faces are different, faces convey essential information. For example, most of us can recognize a celebrity’s face even if it only appears for a fraction of second or the face of an old college friend even after decades of not seeing him. Many of us can sense the mood of a significant other just based on facial expression. Often, we can establish whether a person is trustworthy by just looking at his or her face. Despite intensive research, how the brain achieves all of these behaviors is still a great mystery.

A new study published in Neurology, the medical journal of the American Academy of Neurology (issue of January 22, 2019), identifies for the first time the neurons in the human visual cortex that selectively respond to faces. The study was carried out by Dr. Vadim Axelrod, head of the Consciousness and Cognition Laboratory at the Gonda (Goldschmied) Multidisciplinary Brain Research Center at Bar-Ilan University, in collaboration with a team from Institut du Cerveau et de la Moelle Épinière and Pitié-Salpêtrière Hospital (team leader: Prof. Lionel Naccache).

The researchers showed that the neurons in the visual cortex (in the vicinity of the Fusiform Face Area) responded much more strongly to faces than to city landscapes or objects (see examples: https://youtu.be/QYJCB60FhHE). A high response was found both for faces of famous people (e.g., Charles Aznavour, Nicolas Sarkozy, Catherine Deneuve, Louis De Funes) and for faces unfamiliar to the participant in the experiment. In an additional experiment, the neurons exhibited face-selectivity to human and animal faces that appeared within a movie (a clip from Charlie Chaplin’s The Circus).

“In the early 1970s Prof. Charles Gross and colleagues discovered the neurons in the visual cortex of macaque monkeys that responded to faces. In humans, face-selective activity has been extensively investigated, mainly using non-invasive tools such as functional magnetic resonance imaging (fMRI) and electrophysiology (EEG),” explains the paper’s lead author, Dr. Axelrod. “Strikingly, face-neurons in posterior temporal visual cortex have never been identified before in humans. In our study, we had a very rare opportunity to record neural activity in a single patient while micro-electrodes were implanted in the vicinity of the Fusiform Face Area ? the largest and likely the most important face-selective region of the human brain.” 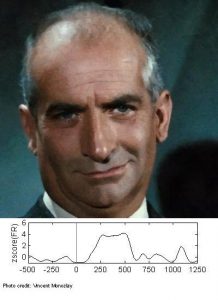 The present results provide unique insights into human brain functioning at the cellular level during face processing. These findings also help bridge the understanding of face mechanisms across species (i.e., monkeys and humans).

“It is really exciting,” Dr. Axelrod says, “that after almost half a century since the discovery of face-neurons in macaque monkeys, it is now possible to demonstrate similar neurons in humans.”