Non-invasive brain stimulation is a rapidly expanding field with promising leads for the treatment of neurodegenerative diseases. Within the Frontlab of the Paris Brain Institute, Clara Sanches, a doctoral student, Dr. Lara Migliaccio (Inserm) and Dr. Antoni Valero-Cabré (CNRS) and their collaborators are combining their expertise on the subject to develop both fundamental research on the subject and a hospital clinical research programme (PHRC AP-HP). They recently published an article in Frontiers in Aging Neuroscience, in which they examine for the first time all the non-invasive brain stimulation trials in eight neurodegenerative diseases and advocate specific directions for better development of this field of biomedical research. 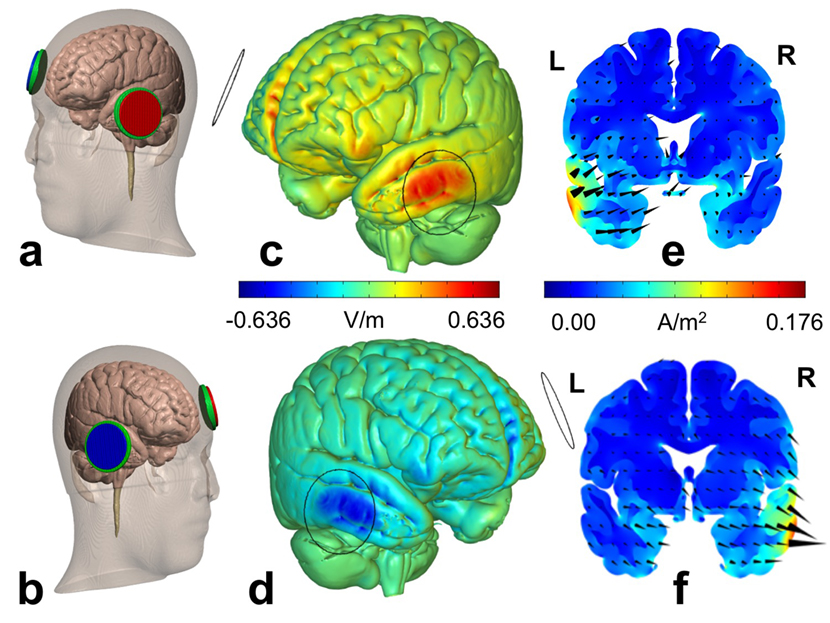 Electrical current distribution in the brain for two given sets of tDCS parameters.

The ageing of the population and the increasing prevalence of neurodegenerative diseases is creating unprecedented pressure on societies and their health systems. Despite promising leads and discoveries, drug treatments and other therapies are still few and far between and have not shown significant ability to alter the prognosis of these diseases.

Non-invasive brain stimulation interventions, such as transcranial magnetic stimulation or direct current electrical stimulation, offer hope for neurodegenerative diseases. They have shown their capacity to act on brain plasticity processes and have been well known for more than a decade in the modulation of various cognitive processes in non-diseased subjects. Recent studies have also shown promise in the ability of these techniques to improve cognitive processes related to language or memory during aging. “For the moment, it is not a question of curing these pathologies, as there is no solid evidence to show that these technologies act on the biological mechanisms of neurodegenerative diseases. On the other hand, through their modulating effects on the activity of cerebral regions and cognitive networks, they could make it possible to better preserve the cognitive functions of patients suffering from neurodegenerative diseases for longer” explains Antoni Valero-Cabré, neurologist and CNRS research director at the Paris Brain Institute’s Frontlab.

Well-known neurodegenerative diseases such as Alzheimer’s and Parkinson’s, but also fronto-temporal degeneration and primary progressive aphasia face huge challenges. Early treatment is one of them. These diseases are a race against time in which existing treatments can often only temporarily slow down the evolution. Preserving patients’ functions as early as possible is therefore essential. Another challenge is the personalisation of treatments. “Even within the same group of neurodegenerative diseases, each patient is different. It is not a question of the duration of the disease or its severity. The cerebral and functional damage can be completely different from one patient to another. ” Lara Migliaccio, neurologist and Inserm researcher in the Paris Brain Institute’s Frontlab, precises.

The Paris Brain Institute’s Frontlab, which brings together researchers and doctor-researchers with multiple areas of expertise in neuroimaging, neurostimulation and neurology, is trying to develop new therapeutic strategies by objectively evaluating the therapeutic effect of non-invasive brain stimulation on the diseased brain.

Transcranial Magnetic Stimulation (TMS) is a non-invasive technology that allows focused action on a particular brain region by means of electrical currents generated by a transient magnetic field. It is capable of transiently altering the activity of the targeted region and has been used to restore normal electrical activity in damaged areas of the brain. TMS acts mainly on superficial regions of the brain, at the level of the cortex, but has nevertheless shown an ability to influence the activity of regions distant from the stimulation area, connected however anatomically by white matter bundles to the latter.

Transcranial direct current electrical stimulation (tDCS) consists of passing a weak electrical current between two electrodes placed on two distant regions of the skull. This has the effect of polarising a region of the cortex and thus modulating the excitability of neurons, making them more or less sensitive to physiological activation. Unlike TMS, it does not act directly on the electrical activity of the neurons in the cortex. It has the advantage of being much less expensive than TMS and easier to use in hospital or in follow-up care, but with less spatial precision.

Two main rehabilitation strategies are favoured for these techniques. One is to increase the activity of the cortex in regions associated with specific cognitive functions, and/or to block the activity of networks that could interfere with or prevent the recovery of patients’ abilities.

In an article published in the journal Frontiers in Aging Neuroscience, Lara Migliaccio, Antoni Valero-Cabré, and their teams at Frontlab, review all published studies of non-invasive brain stimulation in eight neurodegenerative diseases: Alzheimer’s disease, Parkinson’s disease, dementia with Lewy bodies, primary progressive aphasia, behavioural variant of frontotemporal degeneration, cortico-basal syndrome, progressive supranuclear palsy and posterior cortical atrophy. The majority of them present interesting results, more or less preliminary, for the preservation of cognitive functions thanks to non-invasive brain stimulation, suggesting the interest of continuing research in this field. However, the diversity of strategies used in the different studies and the parameters studied to judge the effectiveness of these therapies are too numerous to establish a clear line for the moment as to the use of non-invasive brain stimulation in the different pathologies and the modalities that could be used. Nevertheless, the authors present in detail a series of clinical, cognitive and technological suggestions and innovations to guide the development of future studies and trials.

Pre-therapeutic data published by Dr. Valero-Cabré and Dr. Marc Teichmann (Institute of Memory and Alzheimer’s Disease, IM2A, APHP) in the prestigious journal Annals of Neurology in 2016 led to the development of a therapeutic trial, financed by the APHP (PHRC National) and the Alzheimer Research Foundation (FRA). This trial is currently being conducted at IM2A on a population of patients with primary progressive aphasia, semantic variant.  “For this clinical research project with a therapeutic aim, we were interested in a pathology in which variability is minimal. The patients’ atrophy is very focused on the left temporal lobe, but even in this case we realised that there was a high degree of variability from one patient to another. Some patients have bilateral involvement, others have frontal lobe involvement…” continues Lara Migliaccio. “During the pandemic, the personalisation of treatment, the development of a stimulation platform and the evaluation to be carried out at home by caregivers under telemedicine control have thus become key elements in the future development of these therapeutic strategies. “adds Dr. Valero-Cabré. The study has already shown promising results on the use of transcranial direct current stimulation to improve language skills in patients with primary progressive aphasia and continues, despite difficulties related to health conditions, to actively seek patients.

Another study also showed a beneficial pre-therapeutic effect of transcranial direct current stimulation on similar language impairment in another pathology targeting the dorsolateral prefrontal cortex: progressive supranuclear palsy. The results of pre-therapeutic trials on other neurodegenerative pathologies, such as fronto-temporal dementia or the logopenic (difficulty in finding words without comprehension problems) and non-fluent (difficulty in syntax, elocution, reading and writing) variants of primary progressive aphasia, also explored by these teams, are currently being analysed or published. 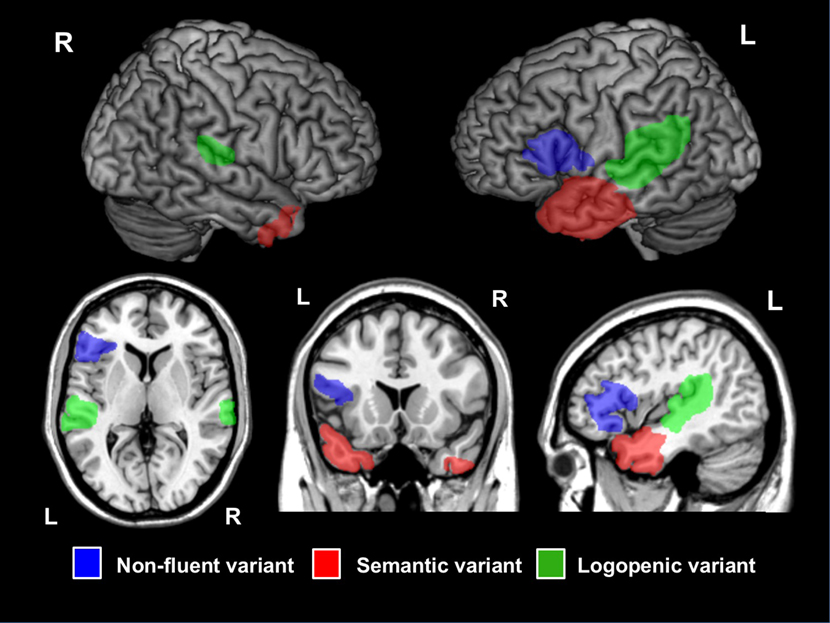 Affected cortical regions in patients with primary progressive aphasia (PPA), shown on a standard brain. Regions specific to each PPA variant are indicated by different colours.

All these very encouraging results in patients underline the interest in continuing brain stimulation studies in patients. The STIM-DS trial is still recruiting patients.

“Our study highlights three challenges for the future of non-invasive brain stimulation treatments: the personalisation of therapies, the interest in integrating them into a more global care approach with a cognitive rehabilitation programme or as a complement to drug therapies, and this from the early stages of the disease. “The two researchers emphasise.

From a technical point of view, research should also integrate new knowledge on the mechanisms and constraints guiding the impact of electric and magnetic fields on brain tissue and brain activity, to develop more optimised neurostimulation approaches that adapt to the morphological characteristics of the head and brain of each patient and to the extent of neurodegenerative cortical atrophy.

Years of failed drug therapies for neurodegenerative diseases have raised the issue of the treatment window. Symptoms of these diseases do not appear until years after the onset of brain damage, and the damage is already too great by the time treatments are provided to have a significant effect. Acting at early stages of the disease, however, requires early diagnosis and reliable biomarkers of disease progression to assess the impact of the therapies being tested. “On this issue, brain stimulation will be fully effective if it is provided as early as possible, when the damage is not yet extensive. It will then be a real tool for preserving the potential of patients’ cognitive abilities. “concludes Antoni Valero-Cabré.