This work, published in the journal Genes and Immunity, underline new perspectives in MS therapeutic research. Multiple sclerosis (MS) is a central nervous system disease in which the protecting system (the immune system), usually fighting bacterias and virus, is getting out of control and attacks self elements of the body. In MS, an inflammatory response destroys the protective myelin sheath surrounding neuronal extension (the axons). This protection is mainly involved in fast nervous conduction of information’s between brain and muscles and also in neurons and axons feeding. A repetitive inflammatory attack affects information transfert leading to motor (mainly difficulties to walk), sensitives (hot-cold sensations, sense of touch, pins and needles…), balance, visual or urinary impairments. Today, between 60 000 to 75 000 individuals are affected with an estimation of 2 500 new cases per year in France with two women for one man between 20 and 40 years.

MS is a multifactorial disease meaning that its development is favored by the association between several genetic and environmental factors. Isabelle Cournu-Rebeix and Bertrand Fontaine’s team, researcher at the Institut du Cerveau – ICM, just showed the implication of new molecules in MS development. Published in the Genes and Immunity journal, their work show the role of molecules involved in the migration process of immune cells (T lymphocytes) within the brain. T lymphocytes migration in the central nervous system is a crucial and early step in MS development and constitutes an efficient target of actual treatments. Indeed, blocking T lymphocytes migration in the central nervous system decreases myelin sheath degradation favoring its repair and the restoration of neurologic functions.

Thanks to this analysis of genes network implicated in immune cells migration, the Institut du Cerveau – ICM’s team just highlighted 5 new groups of genes associated to MS susceptibility. This discovery emphasizes the genetic basis of actual treatments efficacy and could orient research toward futures therapeutic targets. 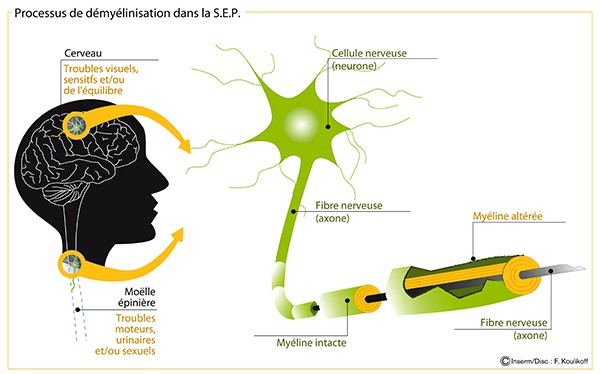