Nicolas Renier, a new team leader at the Institut du Cerveau – ICM, joined the Institute on the 1st January 2017. His work focuses on changes of connections between neurons in adulthood, using a new technique: 3D brain imaging through light-sheet microscopy. This fundamental work could ultimately lead to applications for various neurodegenerative diseases, such as Alzheimer’s disease, or stroke.

What will your work consist in at the Institut du Cerveau – ICM?

The work of my team will focus on large scale rearrangements of neural networks structure in adult brain. We want to know in particular how learning and adaptability phenomena in the adult brain are reflected by changes in the morphology and connectivity of neurons over time. 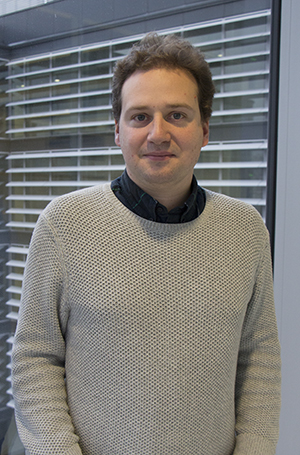 More specifically, we will address this issue through two different aspects. First, from a molecular and cellular perspective, what are the factors that ensure survival and maintenance of the many branches of a mature adult neuron under normal conditions? From a dynamic point of view, what factors will then foster rearrangements of neuron connectivity by the creation of new branches, or possibly even the controlled destruction of certain branches?

We will also study these phenomena on a much wider scale, trying to determine whether certain changes in the mammal behaviour could sometimes be explained by a massive reorganization of the connections between specific groups of neurons in adults.

What models will your work be based on?

We work with the mouse. We will base our work on simple behavioural tasks, which the mouse adopts naturally, but which undergo changes during its lifetime. We will study how their brain changes and adapts to enable the animal to perform new tasks over time. Thanks to the imaging and genetic techniques, we hope to be able to describe very precisely the changes in the organization of certain neural circuits.

A very striking example is the evolution of parental behaviours in mice. Before having young, the male mice are indifferent or even aggressive towards the young. But after a first mating, a transition of behaviour takes place, and the mouse tolerates the presence of the young. The time taken for this change in behaviour corresponds exactly to gestation time. This means that when the babies arrive the male mouse is ready to live with them, or even participate in parenting tasks. We do not know yet precisely what changes in the organisation of connections between neurons could explain this behavioural adaptation. We will therefore explore which modifications of axonal projections in the brain support this type of behaviour transitions, and at molecular level which proteins control the creation and destruction of neuronal branches.

This is similar to the study of axon guidance or neuron migration during embryonic development. However, in the adult brain we work on a relatively frozen environment in comparison with the exuberance of cellular movements in the embryo. Our hope is that the potential to make and break connections between neurons on a large scale still exists in the adult brain. This phenomenon is studied at different scales and is called cerebral plasticity. 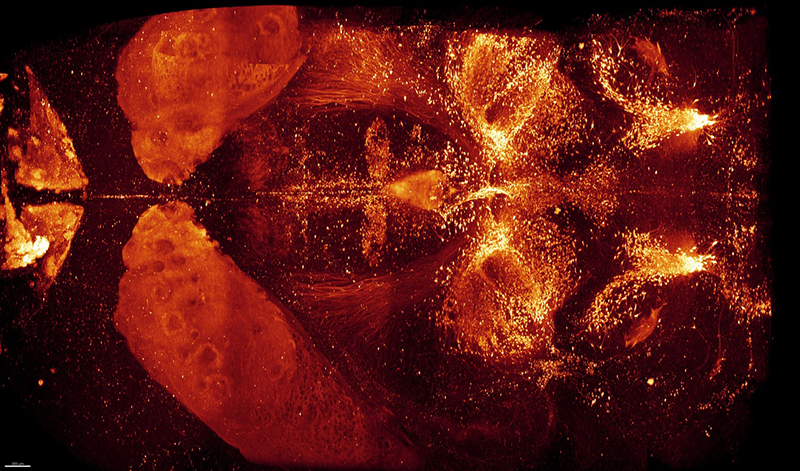 Will your work make knowledge advance about certain neurological diseases?

Our topic is very basic but can lead to medical applications in the long term: our work could make it possible, for example, to better understand the mechanisms of degeneration of neurons in neurodegenerative diseases. Certain processes controlling in a normal situation the stability of each branch of a neuron can for example race and lead to a degradation of neurons or their branches in pathological situation.

Also, if we understand how new long-distance connections develop between mature adult neurons, we could try and support the restoration of projections in regions of the brain that have become silent after a lesion or a stroke.

After a stroke, neuronal death and loss of general activity were observed in the affected area. Our studies could identify new molecular targets in order to promote the re-wiring of these silent regions through adjacent regions.

The neuronal deaths phenomena are of course one of the major characteristics of neurodegenerative diseases. The degradation of brain tissue through problems affecting glia, vascularisation, potentially the accumulation of plaques, etc. can lead to neurons’ death. Several teams today think that neuronal loss could be an active process of destruction of neurons and their axons, beyond simply “passive” death due to the degradation of their environment. In a patient, even in early Alzheimer’s for example, it would be possible for active degradation of connections between neurons to be in progress, a phenomenon that could be in continuity with the “physiological” mechanisms of axon restoration that we will try to elucidate.

Our work is thus upstream and alongside the research focused on these diseases’ causes and treatments, and we hope to be able to interact closely with the other Institut du Cerveau – ICM teams working directly on these topics.

Do you have a particular studying method?

Our main tool is the 3D brain imaging through light-sheet microscopy. This imaging method is booming. It is based on obtaining transparent samples and I have had the opportunity to participate in the development of protocols and analytical methods in the United States at the University of Rockefeller. The protocol that I have set up with my colleagues makes it possible to specifically mark certain neurons in an intact brain, and then to image it by making it optically transparent by a chemical process, while keeping it intact. Thanks to molecular biology and genetics tools, we can reveal neuronal circuits with high accuracy and reproducibility, and then observe them in three dimensions thanks to light-sheet microscopy. 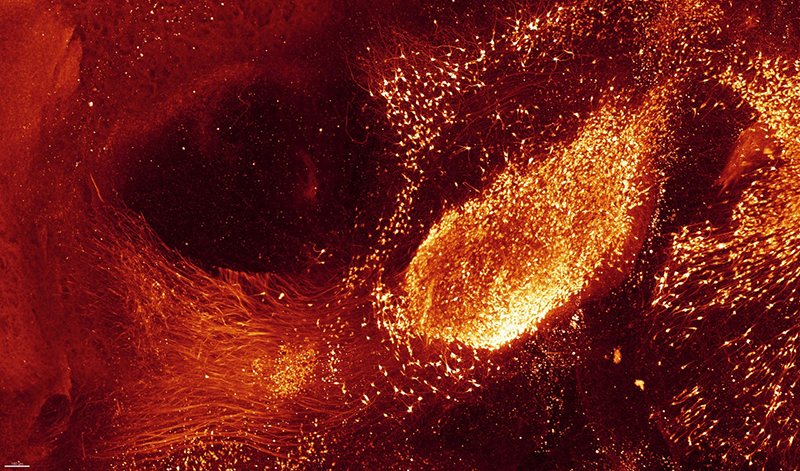 More precisely, the microscopy technique consists in scanning the brain with a plane laser beam, a bit like making cuts in the sample. As this sheet of light can move very quickly from top to bottom, we save a lot of time compared to classical microscopes that work point by point in 3D space. Our whole project relies on this new technological capacity to image brains at very high speed.

This will enable data statistical processing, which is difficult in traditional study with cuts. There are indeed already many mapping techniques based on physical cuts obtained from the sample. In our case, in one hour we can scan an entire brain, keeping the sample intact so it can be imaged again. This allows continuous imaging of the samples. The Institute is currently purchasing all the equipment needed to perform this new type of imaging.

Your work seems to have several common points with that of the team of Bassem Hassan, is this correct?

Yes indeed. Along with the team of Bassem Hassan, we are part of the same thematic axis, which is quite new in the Institute. We have similar interests concerning the nervous system development and neurons origin, but also the links between morphogenesis development and neuron projections, and the influence that these may have on the behaviour. The team of Bassem Hassan is interested in the interindividual variability of behaviour in Drosophila, and the neural substrate of these behaviours. This joins some concepts that we would like very much to start exploring in mice.

What was your background before arriving at the Institut du Cerveau – ICM?

I studied most of the time in Paris, and especially my PhD, at the Institute of Vision, with Alain Chédotal, who works on the development of the nervous system and axonal guidance. I already had a strong interest in this topic at the time, when I was trying to understand how the guiding errors during development were then corrected by the plasticity of networks in adulthood. For my post-doctorate I joined the laboratory of Marc Tessier-Lavigne in New York in the University of Rockefeller, which is well known for its work on axonal guidance molecules.

While I wanted to visualize neurons’ axons during development, I started to develop improvements for existing three-dimensional imaging techniques. My mission mostly consisted in making technical developments for 3D imaging techniques by light-sheet microscopy to be used in neuroscience for the study of neuronal circuits in intact brains.

Today, at the Institut du Cerveau – ICM, I wish to carry on my research, trying to exploit this technique as much as possible to make new discoveries on neurons connectivity development in adults.