A study conducted by Alberto BACCI’s (CNRS) team at the Institut du Cerveau – ICM showed that a specific type of inhibitory neuron of the cerebral cortex makes a large number of synapses with themselves (autapses).  Autaptic self-inhibition is much stronger than inhibition that these cells provide to other neurons within the cortical circuit. This mechanism influences the coupling between these cells and gamma-oscillations, a brain rhythm that is crucial for sensory perception, attention, memory and other cognitive-related processes. These results are published in PLoS Biology. 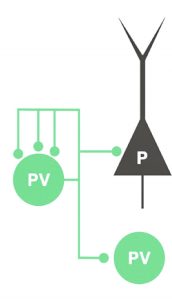 In the cerebral cortex, PV (parvalbumin) basket cells represent a prominent subtype of inhibitory neurons that play several important functions during cortical activity. These cells are known as the ‘metronomes’ of neuronal networks, because they set the tempo and synchronize many neurons, driving several forms of brain oscillations important for cognitive functions, such as sensory perception, memory and attention.

Neurons communicate with each other via synaptic contacts (synapses), which are specialized structures usually connecting two neurons sitting either at distant locations or within the local microcircuits.

A study conducted by Alberto BACCI’s team at the Institut du Cerveau – ICM found that autapses in PV cells are very common and powerful: about 70% of PV cells exhibited autaptic transmission – and that they generate huge functional inhibitory responses.

We found that PV basket cells make multiple autapses onto themselves and provide a very powerful and fast self-inhibition of PV cells but up to now the strength and impact of this autaptic inhibition in cortical circuits were neglected. That’s why the first important step was to quantify this auto-inhibition” explains Charlotte DELEUZE, first author of the study.

To this aim, they considered the two major synaptic partners of PV cells within cortical circuits: pyramidal neurons (PNs) and other PV cells, and measured the strength of autaptic self-inhibition compared to the synaptic inhibition from the same PV cells onto other targets. They show that, autaptic responses are much stronger than synaptic transmission with PNs (three-fold larger) and other PV cells (2-fold larger). Using a novel analytical approach, developed by a collaborating laboratory directed by Marco BEATO in UCL, London, they found that at PV-PN connections, autaptic transmission is stronger because of a higher post-synaptic sensitivity. Conversely, at PV-PV connections, autapses dominated due to a larger number of autaptic release sites.

After showing that autapses produce a stronger inhibition than synapses, the major question was the extent of this inhibition. A single PV cell receives many inputs from other PV cells and from itself. How much do these autapses account for the overall inhibition these cells receive?” continues Alberto BACCI, team leader at the Institut du Cerveau – ICM.

Using two different approaches, the team showed that about 40% of the global inhibition received by those neurons come from their own autaptic connections.

“PV cells are known to drive gamma oscillation (30-80 Hz), like a metronome. During gamma oscillations, what is the role of autapses? We hypothesized that autapses play a role in keeping PV cells in sync with gamma oscillations. To test that, we generated this type of oscillations artificially using optogenetics.” says Charlotte DELEUZE.

The team found that blocking autapses in single PV cells strongly modify the degree of synchronization of these neurons to gamma oscillations. Without autapses, the spiking activity generated by PV neurons is more randomly distributed, desynchronized with the phase of oscillations, making everything noisier and less precise. Spike timing is essential for the correct flow of information between networks.

Autaptic self-inhibition of PV cells could therefore be an important mechanism underlying the key role of these cells during sensory processing and other important cognitive functions, with possible crucial consequences in both physiological and pathological cortical operations.