The aim of Dr A. Sittler, from the Alexis Brice and Giovanni Stevanin team, is to develop a new therapeutic strategy for the spinocerebellar ataxia SCA7.

A. Sittler and her colleagues have previously shown, in a cell model of spinocerebellar ataxia SCA7, that interferon-beta induces the expression of promyelocytic leukemia protein (PML) and the formation of PML nuclear bodies that degrade mutant ataxin-7, suggesting that the cytokine, used to treat multiple sclerosis, might have therapeutic value in SCA7. We now show that interferon-beta also induces PML-dependent clearance of ataxin-7 in a preclinical model, SCA7266Q/5Q knock-in mice, and improves motor function. Immunohistological studies in brains from two SCA7 patients confirmed that these modifications are also caused by the disease in humans.

The treatment induced PML expression and the formation of PML nuclear bodies and decreased mutant ataxin-7 in neuronal intranuclear inclusions, the hallmark of the disease. No reactive gliosis or other signs of toxicity were observed in the brain or internal organs. The performance of the SCA7266Q/5Q knock-in mice was significantly improved on two behavioral tests sensitive to cerebellar function. In addition to motor dysfunction, SCA7266Q/5Q mice present abnormalities in the retina as in patients: ataxin-7-positive neuronal intranuclear inclusions which were reduced by interferon-beta treatment. Finally, since neuronal death does not occur in the cerebellum of SCA7266Q/5Q mice, we showed in primary cell cultures expressing mutant ataxin-7 that interferon-beta treatment improves Purkinje cell survival. 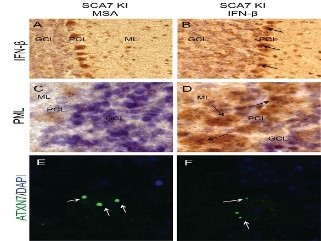 – A and B: Visualization of the interferon beta. The Purkinje cells are deeper labeled (dark brown) in B, see the black arrows.

– C and D: Visualization of the PML protein. On the D picture, a lot of dark brown dots (PML nuclear bodies) are located inside the cells (black arrows). On C picture, the dark brown dots are rare and very small.

– E and F: Visualization of the mutant Ataxin 7 protein (green). E: three large inclusions of the pathogenic protein are present in a Purkinje cell. F: the inclusions are very smaller after the interferon beta treatment.