An international clinical trial in Creutzfeldt-Jakob disease was conducted in France and Italy. Led in France by reasearchers from the Brain and Spinal institute (Jean Philippe Brandel and Stéphane Haïk), this study opens new perspectives for the implementation of controlled-trials in Creutzfeldt-Jakob disease. Results of this study are published in the prestigious journal Lancet Neurology (online publication 8th of January 2014 and issue of February).

Creutzfeldt-Jakob disease (CJD) is one of the most frequent prion diseases in humans. In most instances (more than 85%) the disease is sporadic and occurs spontaneously and randomly. Genetic forms associated with mutations in the gene coding for the prion protein account for 15% of cases. The disease is rarely acquired through medical procedures or exposure to tissue infected with the agent of bovine spongiform encephalopathy. In infectious forms, the incubation period is long and can last for decades in humans. After clinical onset, disease duration is short and death occur in few months. No effective treatments for CJD exist at present. The rarity of the disease (1-2 new case per million of habitants), the distribution and the subacute evolution of the disease limited for a long time the implementation of controlled-clinical trials (where a new therapy is compared to a placebo or an effective molecule used as a reference).

In vitro and in vivo experimental results suggested an anti-prion effect of doxycycline. Morever, previous observational studies in Italy and Germany suggested that a daily treatment with 100mg of doxycycline increases survival for treated-patients compared to historical cohorts. Relying on these corroborating and promising results, an international placebo-controlled trial took place in France and Italy. This is the first international trial and the largest controlled-trial performed in this disease.

The first intermediate analysis didn’t show significant effect of the treatment on patient survival and concluded that trial continuation was useless. This was confirmed by the final analysis on the overall patients in France and Italy. Doxycycline concentration measurements performed for the first time in the human brain suggested that a daily administration of a higher dose of doxycycline could be beneficial.

Despite these negative results, this study gave major knowledge for the assessment of future treatments in CJD :
– Placebo-controlled trials are feasible in CJD
– These trials are of major interest since open-label trials in CJD suffer from severe selection bias.
– Buidling of multinational trials is required to allow the recruitment of a sufficient number of patients in a such rare and rapidly fatal disease.

Thanks to this first international experience and depending on the evolution of scientific datas, the implementation of a future European trial will be discussed. 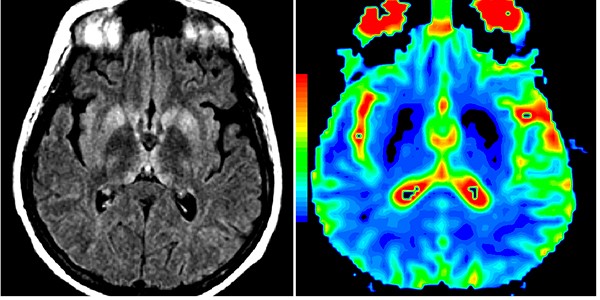 Brain MRI of a patient with the Creutzfeldt-Jakob disease