The illustration of this article is on the cover of the latest issue of the journal “Brain, a Journal of Neurology” 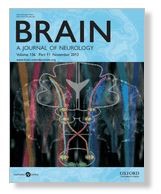 Congenital mirror movement disorder is a rare disease which is inherited in an autosomal dominant manner. Individuals with mirror movements are unable to perform independent actions with the two hands: when one hand is moving, the other one can’t help moving in the same way, against the patient’s will. Hence, patients suffering from this disorder can’t perform complex bimanual movements such as playing the piano for instance. The onset of the symptoms starts in infancy or early childhood, and the severity of the symptoms remains unchanged over time. In humans, the motor system is crossed: the left cortical motor area controls the movement of the right hand, and vice-versa with the right cortical motor area and the left hand. The crossing occurs at the level of the brainstem, with the decussation of the motor pathways. The presence of the crossing and a good communication between the two brain hemispheres during the movement are key factors conditioning the ability to perform the intended lateralized hand action. Additionally, the movement has to be correctly planned in specific brain areas.

In 2012, a team of Institut du Cerveau – ICM researchers showed that the RAD51 gene was responsible for congenital mirror movement in a large French family, using a traditional genetic analysis and a “whole exome” analysis (a new technique that allows sequencing specifically the coding part of the genome). Still at the Institut du Cerveau – ICM, Cécile Galléa and collaborators studied patients belonging to this large French family with mirror movements, using a complementary approach that combines multimodal magnetic resonance imaging (MRI) and advanced neurophysiological techniques. This approach allowed a better understanding of the mechanisms involved in this disorder. They showed that patients with mirror movement had a disorganization of the whole motor system involved in lateralized hand actions with

1) an abnormal crossing of the motor pathway at the level of the brainstem,

2) an abnormal communication between brain hemispheres during movement execution, 3) an abnormal motor planning of hand movements.
These findings are the starting point of new ideas to investigate the motor system development and to better understand the brain mechanisms involved in controlling unimanual and bimanual movements. These findings could also help explaining other movement disorders with specific impairments of skilful hand movements such as dystonia or other neuro-developmental genetic disorders.

This work illustrates the synergic power of the BSI that allows in situ translational collaboration from gene identification to the investigation of the pathophysiology of diseases in patients.