“What did you do yesterday?” “I went to work,” the subjects answers, perfectly sincere. The subject was not at work the day before, he was hospitalized. This person suffers from confabulation.

In a study published in the September 2014 issue of the scientific journal Cortex (number 58), Pr. Gianfranco Dalla Barba of the Brain and Spine Institute – Institut du Cerveau – ICM – and his collaborators demonstrated that “confabulators mistake multiplicity for uniqueness” in other words, they replace memories of single events from the past with memories of routine events. In an experimental study using a recognition memory task, the researchers confirmed, for the first time, a phenomenon, up till now only known and described clinically. This study greatly advances the diagnosis of confabulation and distinguishes it from other types of memory disorder in patients suffering from organic amnesia.

Confabulation accompanies certain forms of organic amnesia – consequences of brain lesions (neurological disease, brain traumatisms, tumors, episodes of anoxia or ischemia…), unlike other types of amnesia of psychogenic origin (stress, depression…). A distortion of memory, generally confused with mythomania (a kind of pathological imagination with repeated lying, a disorder of which the patient is partially aware), confabulation refers to an imaginary story that the subject more or less believes.

Following their studies on the hippocampus and the implication of this region of the brain in temporal memory – notion of the personal past, present and future (“The Hippocampus, a time machine that makes errors“) – the group of Pr. Dalla Barba (Institut du Cerveau – ICM and Department of Life Sciences, Università Degli Studi, Trieste – Italy) and their collaborators (IM2A – Pitié-Salpêtrière, Paris ; Centro Medico di Foniatria, Padoua, Italy) go further in their understanding of the mysteries of memory on the cognitive level.

According to the recent results published in Cortex, confabulators report routine events and habits (multiple or repeated events) as if they were unique (specific events that occurred in the past), having lost, apparently, the capacity to discriminate between the two. This dramatic pathological condition observed in confabulators results from the disturbance of basic biological mechanisms that underlie the organisation and discrimination of events, knowledge and information. 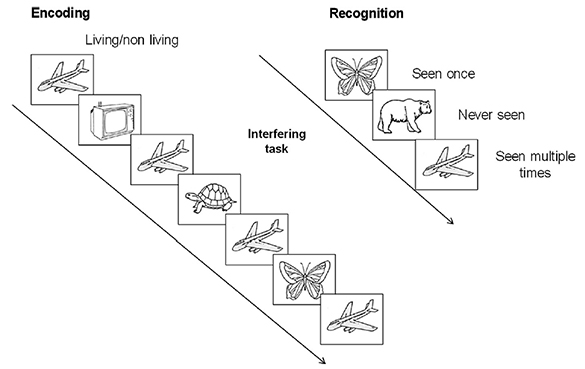 Serra et al., Cortex, 2014 – Design of the Multiple-Unique Task. The task consists of four runs of an encoding and a subsequent recognition task; between the two, participants performed an interfering task. The encoding phase included 24 items (4 items that appeared once, 4 items that appeared four times each and 4 buffer items); during this phase participants performed a living/non living judgment. During the recognition phase, the old pictures appeared once together with an equivalent number of new pictures. For each item three different responses were possible: seen once, seen multiple times, never seen. © Cortex – ELSEVIER