Two researchers of the Institut du Cerveau et de la Moelle épinière – Institut du Cerveau – ICM – Brain and Spine Institute, Fabrizio DE VICO FALLANI and Mario CHAVEZ, in collaboration with the University of Grenoble (Sophie ACHARD) and the Stanford University (Jonas RICHIARDI), have contributed to the theme issue with a review on the use of graph analysis of functional brain networks. The major thrust of this review is to provide researchers and neuroscientists with focused indications to make sense of their brain network analysis and avoid the most common traps in using graph theory.

Clearer comprehension of the brain organization is fundamental to understand many aspects of the human cognitive function, brain development and clinical brain disorders.

We have known for at least 100 years that the brain is organized as a network of connections between neuronal ensembles. But only in the last 10 years there has been a rapid growth in our capability to quantify the complex topological pattern of brain connectivity, using mathematical tools drawn from “graph theory” (mathematical and computer theory, of which algorithms have many applications in all areas related to the concept of network).

The Philosophical Transactions of the Royal Society B journal has published a theme issue – Complex network theory and the brain – that brings together articles and reviews from some of the world’s leading experts in contemporary brain network analysis by graph theory, amongst them the researchers Fabrizio DE VICO FALLANI and Mario CHAVEZ from the ARAMIS Team at the Institut du Cerveau – ICM (the “Mathematical models and algorithms for processing brain and signals” team). The contributions of this issue are focused on three big questions that seem important at this stage in the scientific evolution of the field:

• How does the topology of a brain network relate to its physical embedding in the anatomical space and to its biological costs?
• How does the brain network topology constraint the cerebral dynamics and function?
• And what are the future methodological developments in the application of graph theory to the analysis of brain networks? 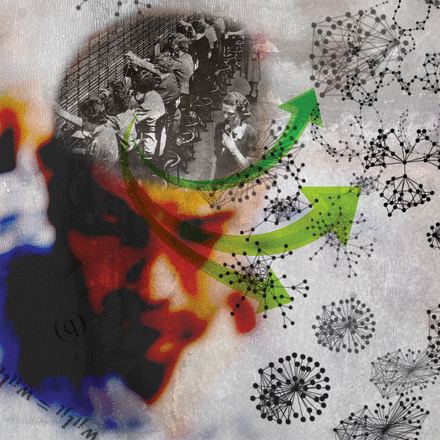 Illustration :
Illustration of the thematic issue Complex network theory and the brain of Philosophical Transactions of the Royal Society B journal.