Henry Raker came to the Institut du Cerveau – ICM today and gave to Pr Gérard Saillant the cheque of the donation made on Ball XX on september 2012. He told us how fantastic was the BB Cycle Challenge, that just ended on 26th of May. We thank all the 17 team-mates for their efforts and dynamism in this trip! 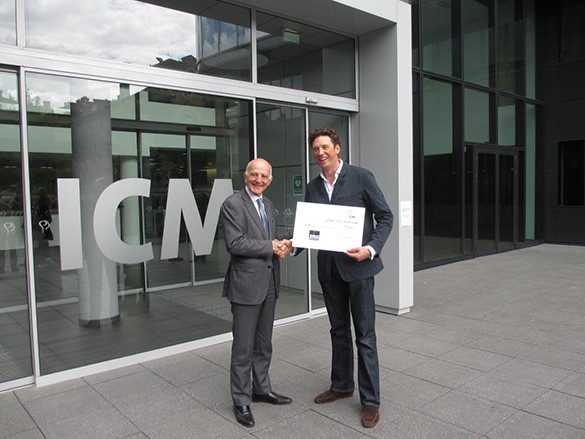 Ferblanc Fundraising is a british charity, created years ago by Henry Raker. Henry had been victim of an strong accident, with injured his spinal cord. This motivated his fundraising action for brain and spinal cord research. Ferblanc fundraising is the major individual fundraising for the Institut du Cerveau – ICM organization, created in United Kingdom. Several events, like a bicycle tour or a Ball took part for 3 years, in order to help the Institut du Cerveau – ICM.

This year, Henry and friends, with help of sponsors, will run 500 km within 4 days to join Bordeaux to Béziers, south-west of France.

We really thank all the volunteers of this sympathetic initiative, and greet the original spirit of this adventure! Thank you all and be careful on the road!