Prof. Laurent Cohen, professor of neurology and team leader at the Institut du Cerveau – ICM, Prof Alexandre Carpentier, neurosurgeon and Carthera CEO, and Pierre-Yves Frouin, Bioserenity CEO, spoke at the Galien Award ceremony on Wednesday, December 7 that recognizes research and therapeutic innovations made available to the public on a yearly basis. The event was hosted by Prof Yves Agid, neurologist and Founding Member of the Institute. 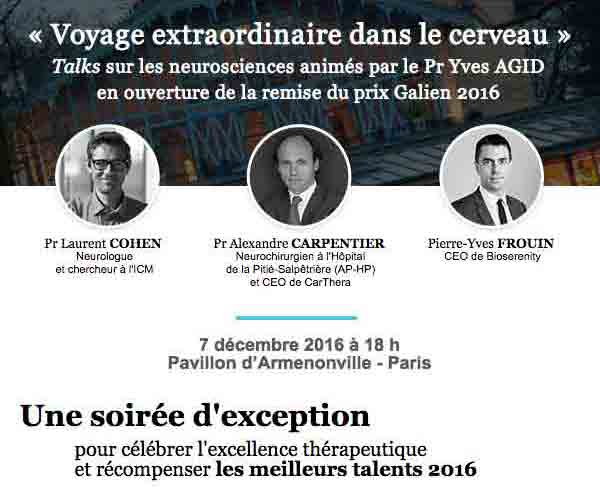 Laurent Cohen is a professor of neurology at the Salpêtrière Hospital, and team leader at the Institut du Cerveau – ICM. His area of work is brain mechanisms involved in reading and brain function of blind patients. During his speech, he mentioned the two methods used to understand the cerebral mechanisms in human mental function: the study of the behavior and brain damage of patients with neurological illness, and anatomical and functional brain imaging.

Professor Alexandre Carpentier is a neurosurgeon with a specialty in brain tumor and epilepsy surgery at the Pitié Salpêtrière Hospital in Paris (Assistance Publique Hôpitaux de Paris). His research is centered on the development of new minimally invasive surgical techniques using MRI. Recently, Prof Carpentier succeeded in opening the Blood-brain barrier using ultrasound for the first time in a human patient (A. Carpentier, Science Translational Medicine 2016).

Pierre-Yves Frouin is CEO of BioSerenity, the startup he founded in 2014. The company’s operations are centered on ambulatory diagnostics. Located within the Institut du Cerveau – ICM, BioSerenity has a staff of nearly 50, with high growth and many awards including the World Innovation Awards. He spoke about the creation of new patient diagnostics and ambulatory monitoring systems. An individual no longer has to be physically present in a recording room to undergo monitoring. This paradigm change leads to possibilities for long-term data recording, at home, with lowered costs for healthcare structures.

Every year, the Galien Award rewards recent therapeutic innovations made available to the public as well as pharmaceutical research. It hopes to promote and boost drug research and give research teams extra encouragement.

LIONEL NACCACHE, WORLD SPECIALIST OF CONSCIOUSNESS, AWARDED BY THE ACADEMY OF SCIENCES