ALS and FTLD are prevalent neurodegenerative disorders which share common clinical, pathological and genetic characteristics. Amyotrophic Lateral Sclerosis (ALS) is the most common motor neuron disease characterized by progressive paralysis caused by the gradual loss of upper and lower motor neurons. Frontotemporal Lobar Degeneration (FTLD) is the second most common form of degenerative dementia, affecting individuals younger than 65 years. FTLD comprises the progressive atrophy of the frontal and temporal lobes of the brain and is distinguished by deteriorations in language, behavior control and emotional management.
While traditionally considered as two separate etiologies, emerging clinical commonalities between ALS and FTLD brought forth the concept of an ALS/FTLD disorder. The ALS/FTLD link was finally consolidated with the recent discovery of C9orf72 gene, as the most common genetic cause for both ALS and FTLD and encoding for a protein of unknown function…
Here we report reduced levels of C9ORF72 gene expression in a French cohort of ALS/FTLD patients. Interestingly, we also determined lowered C9orf72 transcript levels in samples from sporadic cases of FTD and ALS/FTLD. Using the zebrafish as a vertebrate genetic model, we investigated whether a decrease in C9orf72 levels is sufficient to induce neuropathological processes. We show that blocking the translation of C9orf72 results in specific locomotor deficits and axonopathy of the motor neurons suggesting that C9orf72 could play an essential role in the functioning and viability of these neurons and could represent a converging pathological mechanism in the ALS/ FTLD Spectrum of neurodegenerative disease. 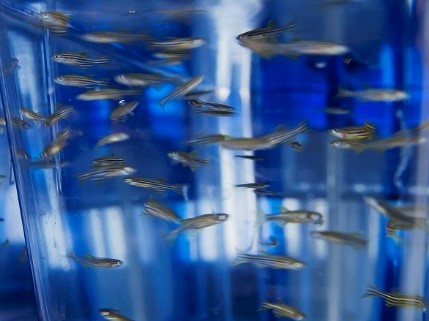