A recent study made by Lionel Naccache, researcher at the Institut du Cerveau – ICM and neurologist at Pitié-Salpêtrière hospital, and his team highlights a new pathway in the processing of visual information by the brain. Published in the “Neuropsychologia” journal, the study’s findings are based on the clinical examination of one single patient, illustrating how important it is to pay close attention to single cases, as they continue, even today, to provide us with original discoveries in the field of Neuroscience.

The patient studied presented a lesion of the corpus callosum, the long and voluminous structure of white matter located between both hemispheres and allowing the transfer of information between them. A lesion of the corpus callosum can lead to defects in information transfers resulting in some surprising clinical presentations. For example, a right-handed patient holding an object in his or her left hand with eyes closed, is unable to name the object. The task of naming an object depends on the left hemisphere activity, but, in this case this left hemisphere does not receive the sensitive information transmitted from patient’s left hand and to the right hemisphere. This naming deficit occurs despite the fact that the right hemisphere correctly recognizes the object, as evidenced by a correct object apprehension and use by the left hand. In extreme cases, where the entire corpus callosum is damaged or surgically cut, two minds are essentially fighting under the same skull (split brain).

The patient studied by Lionel Naccache’s team presented a posterior lesion of the corpus callosum, resulting in visual disconnection: a visual stimulus presented on the left is only analyzed by the right hemisphere and vice versa. When the corpus callosum is normal, the transfer of information from one hemisphere to the other is possible and automatic, rapid and independent of any strategy taking place in the brain. The experiment consisted of asking the patient if two stimuli, presented one after the other, were different or identical from one another. When both stimuli were presented on the same side (and thus to the same hemisphere), the patient easily answered. However, when each stimulus was presented to a different hemisphere, the only way for the patient to solve the task was to transfer information related to the first stimulus to the other hemisphere through an oblique, strategic way: since an automatic transfer is impossible, visual information from the first stimulus had to be mobilized in the anterior regions of the brain (frontal lobe) to follow the preserved anterior part of the corpus callosum and inform the other hemisphere.

Thanks to a combination of experimental methods of vision psychology and anatomical and functional brain-imaging tools (MRI; magnetic resonance imaging & EEG; electroencephalogram), Lionel Naccache’s team was able to highlight this deliberate and strategic pathway, dependent on the frontal lobe.

This result is important for theories of strategic processing (as opposed to automatic processing), and illustrates how contemporary observations of neurological patients can still, in 2014, reveal original mechanisms of cerebral functioning that also occur in healthy subjects. 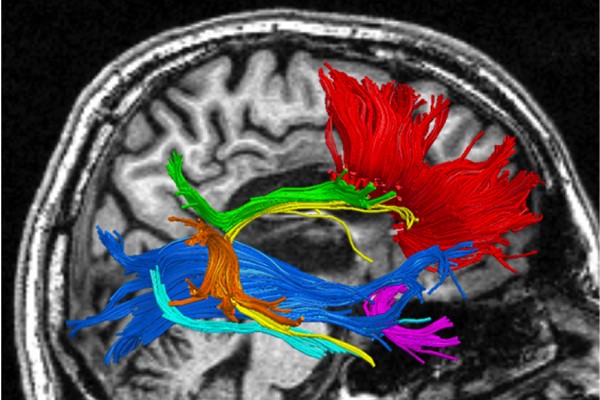 Patient brain MRI revealed a complete destruction of the posterior portion of the corpus callosum which connects the 2 hemispheres (red fibers).