The team of Claire Wyart, Inserm researcher at the Brain Institute and spinal cord, has shown the ability of sensory neurons in the spinal cord to modulate movement. In zebrafish, the researchers showed that activating these neurons triggers locomotion when the animal is at rest, and inhibits it when the animal is moving. These results offer hopeful signs of, one day, precisely stimulate these circuits to generate a movement in patients suffering from spinal cord injury.

Spinal cord injuries cause severe paralysis and receive no treatment to date. When communication between brain and spinal cord is interrupted, brain can no longer voluntarily control movements. However, there are, within the spinal cord, autonomous gait generation circuits that ensure the locomotor programme, once the decision to move is made in the brain. This ability to maintain the movement comes from the ability of the spinal locomotor network to generate electrical oscillations.

In order to understand the operation and modulation of spinal locomotor network, Claire Wyart’s team studies motor functions in zebrafish. This transparent vertebrate is particularly suitable for optogenetics, an advanced technology that allows stimulating the target neurons with light.

With this method, stimulated neurons light up and become visible in transparency.

Researchers used this technology to identify and understand how a new neuronal circuit involved in movement control operate. By activating it at different times (animal at rest or in movement), researchers have highlighted connections able to generate oscillations allowing the fish to move. The originality of this circuit is that it depends on the activity of sensory neurons that, with a ripple effect, ultimately activate motor neurons. 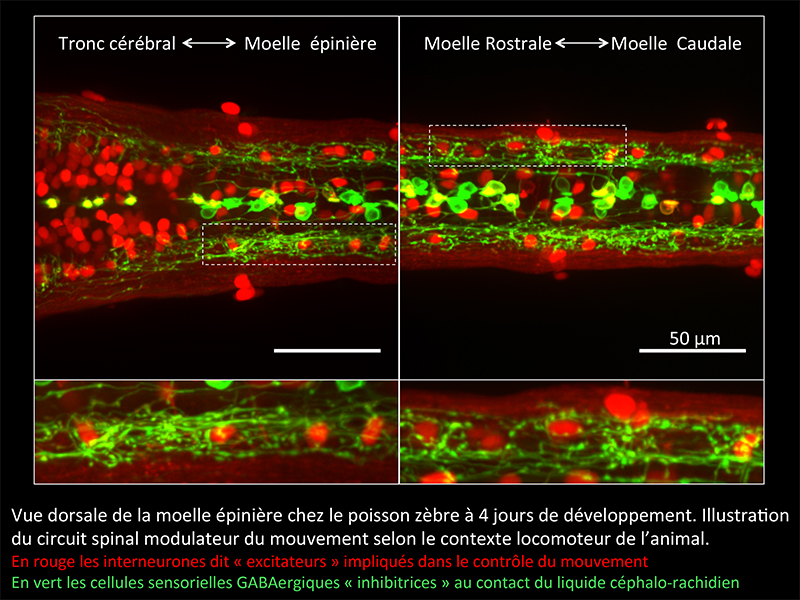 In 2014, the same team had shown that this circuit is kept between the different vertebrate species. These original works in zebrafish thus open many research avenues aiming to understand the modulation of locomotor system in humans.

For the first time, a type of sensory neurons able to modulate the spinal locomotor network was identified. If several points are yet to be elucidated, the stimulation of the sensory pathways to activate the locomotor network for gait generation in humans, gives hope in the case of spinal cord injuries.