Discover the different steps that Institut du Cerveau – ICM made to advance the field of neuroscience. 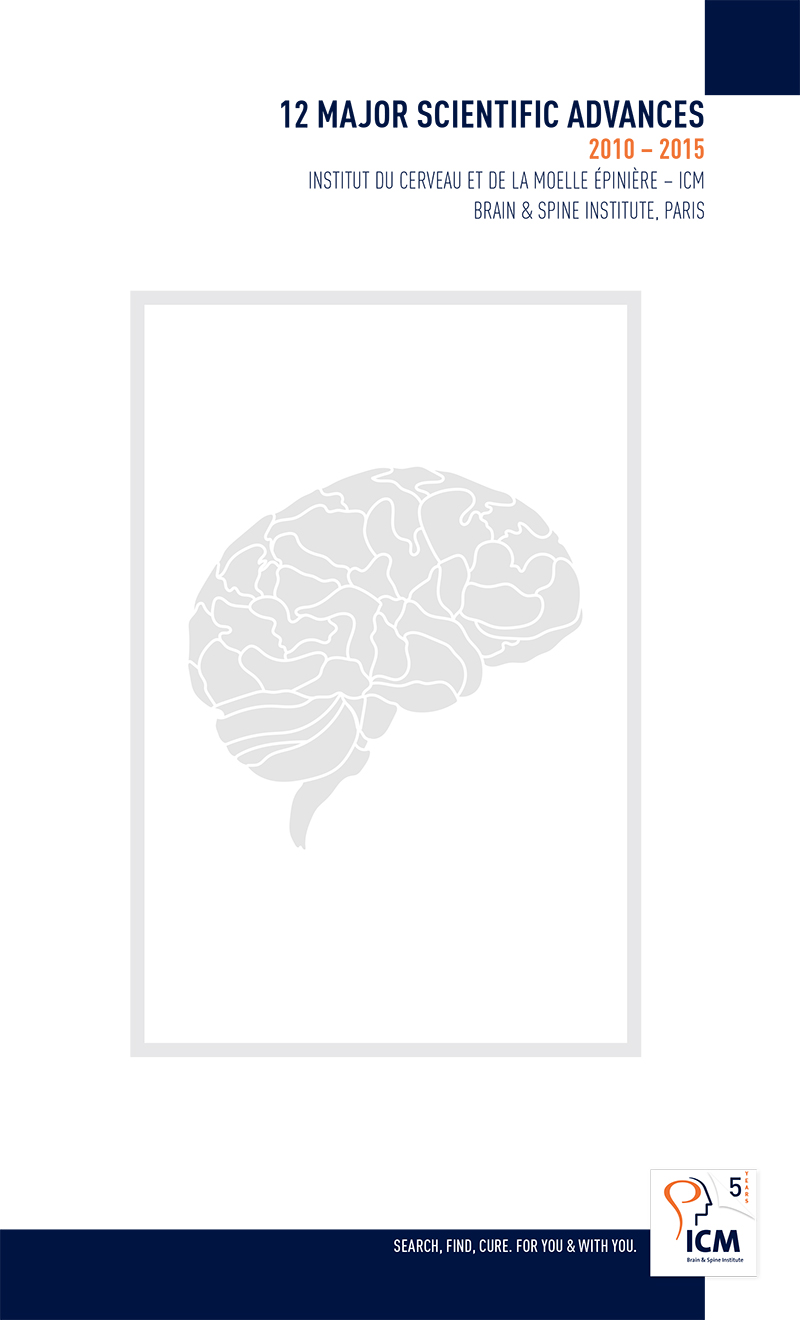 Find our document in PDF version.

Researchers have identified a cellular component – PDK1 kinase – implicated upstream in the pathway that produces pathological misfolded A-beta proteins that form amyloid plaques outside neurons, one of the 2 lesions found in Alzheimer disease. PDK1 is also implicated upstream in the production of abnormal prion proteins. When this target – PDK1 – is blocked by inhibitors in experimental models, the production of pathological A-beta or prion proteins is blocked. PDK1 thus represents a potential and promising therapeutic target for future treatments of both AD and prion diseases (Work of Stéphane Haik).

The result of a highly ambitious genetic study – 4 years of work on a cohort of more than 100 000 individuals, healthy or with the disease – the researchers identified 6 new genetic risk factors, which are specific to Parkinson disease. Like a kind of molecular loan, this result represents an important advance in the genetic detection of the disease, on the one hand, and for the exploration of new therapeutic targets, on the other hand (Work of Alexis Brice).

IDENTIFICATION OF A NEUROPROTECTIVE PEPTIDE THAT CAN PREVENT NEURODEGENERATION

Inspired by strategies used by certain viruses of neurons – neurotropic viruses – which use normal cell functions to block cell death and thus maintain their habitat and survive, the researchers identified a viral protein – protein X – which, by itself and independently of any viral context, prevents the degeneration of the dopaminergic neurons affected by Parkinson disease (Work of Stéphane Hunot).

Thanks to the help of families that agreed to participate in clinical studies and genetic analyses, the researchers identified a new gene – DEPDC5 – in which mutations are implicated in focal familial epilepsies. This discovery, which led to a real leap forward in the understanding of this type of epilepsy, has proved to be very promising for patients in terms of diagnosis (work of Stéphanie Baulac and Eric le Guern).

The symptoms of MS are due to “demyelination” – loss of the myelin sheath that protects axons – wires that conduct the nervous influx – like the insulating sheath that surrounds electrical wires and assures proper conduction of the current.

The researchers identified a molecule – endotheline 1 – which is produced by the surrounding nerve cells in reaction to lesions of the myelin sheath and inhibits re-myelination. This molecule represents a very promising therapeutic target for the development of a re-myelinating treatment, since in experimental models pharmacological inhibition of the molecule accelerates myelination. (Work of Brahim Nait Oumesmar)

STROKE – VASCULAR DISORDERS OF THE BRAIN

Based on the interaction between researchers, physicians, clinicians and engineers, LabCom BRAIN e-NOVATION, a joint laboratory of the Institut du Cerveau – ICM and the GENIOUS group that makes video games, created “Voracy Fish” a “serious game” – therapeutic game – aimed at the reeducation and rehabilitation of stroke patients (in relation with Marie-Laure Welter, coordinator of LabCom).

THE BRAIN AND ITS FUNCTIONING

WRITE AND DRAW WITH THE EYES

Researchers have developed a device that enables one to draw and write thanks to eye movements. This aim of this system is to improve the life of patients with paralysed limbs, offering them an alternative means of communication. (Work of Jean Laurenceau)

DIAGNOSE A STATE OF CONSCIOUSNESS AND ESTABLISH A PROGNOSIS